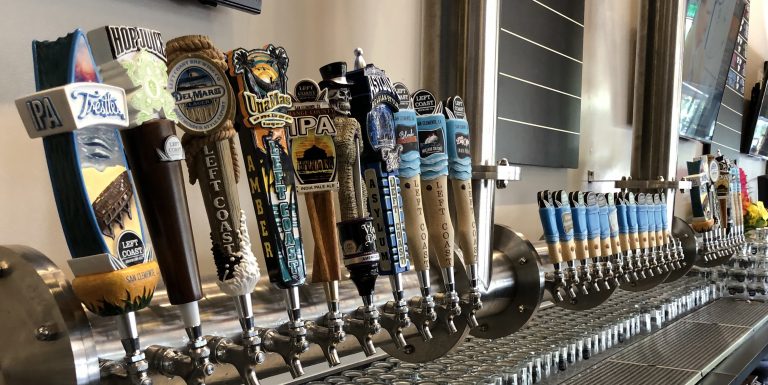 Breweries are not commonplace in Irvine. So, when one opens, it’s going to gather attention.

Originally from San Clemente, Left Coast Brewing Co. has opened a taproom, smokehouse, and pilot brewery on the corner of Sand Canyon and Irvine Center Drive. Surrounded by office buildings and located on the corner of a well-kept strip mall, Left Coast’s second location is making quite the positive impact. Neighboring office employees looking for a bite and a pint, for lunch or after work, can conveniently walk there.

Although Left Coast also produces beers for Oggi’s, the main product line is inoffensive and flavorful.

For the hop-heads, the classic Hop Juice is always a crowd favorite. Blonde Marvel is pleasant on the tongue with biscuit and fruity flavors. For those into the dark side, Voo Doo American Stout leads in with plentiful roast and dark chocolate and finishes with a snappy hop bitterness. Various barrel-aged beers and seasonal offerings are constantly in rotation.

For the best food and beer pairing experience, try either Una Mas or Del Mar.

Una Mas, a Vienna lager with notes of brown sugar and whole-grain toast coupled with the low alcohol percentage ensures the beer will not overpower the meats and starches on your plate. At the same time, the soft and semisweet malt profile and clean finish finds affinity with any of the meats you order.

Del Mar, a Dortmunder Export, shows off a crisp water-cracker malt center with a slight minerality on the finish. Also a lager, Del Mar pairs with almost anything on the plate, just don’t overdo it with the sauces.

Other beers will play nicely with your dish according to your personal preference, but be on the lookout for a smoked saison on the horizon.

“I want to keep at least one different beer on rotation that will enhance the barbecue. That was the inspiration for this beer,” says Jim Clarke, head brewer for Left Coast in Irvine. The smoke character should add a nice affinity to savory, juicy meats. Also in the fermenter, a small-batch American pale ale.

Food orders can be taken at the bar, but the dining area is fast-casual, where you order your meal via a kiosk, and it will be brought out to you. Left Coast Irvine also has a dedicated crowler-fill station where various beers are available to go, canned fresh as you watch.

Craft cocktails should be making their debut soon. A small distillery on site is also in the works, so that will be something to keep an eye open for.