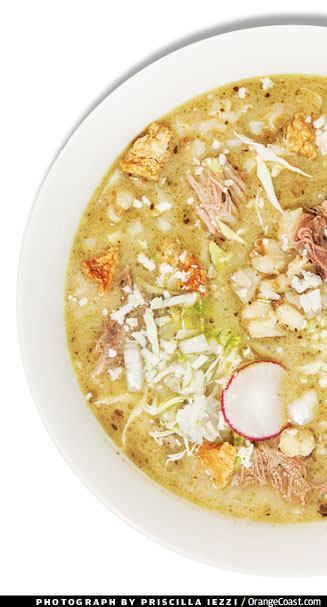 Every bowl of pozole is full of elemental pleasures: swollen kernels of hominy and hunks of fatty pork bobbing in rich, porky broth. A homey Mexican favorite, its origins trace to pre-Columbian traditions that have been refined, reimagined, and reborn over centuries.

It’s no wonder, then, that there are countless variations. Some glow a sinister red, others a verdant green, and still others a translucent white. And with all manner of herbs and vegetables to mix in, it’s completely customizable.

Las Brisas de Apatzingan ladles up three different pozoles. You’ll see regulars slurping up every one, but it’s the green that converts the modest restaurant’s fans into zealots. The broth is vibrant and tart, the product of what must be a bushel of tomatillos and a platter of pork. And this one is a particularly interactive experience: dump the usual cabbage, radish, onion, and avocado into the soup as you also dunk the accompanying pair of potato taquitos, a cheese-stuffed jalapeño, and crispy rinds of fried pig skin. This soup never fails to surprise.

If you were to conjure up your dream bowl of pozole, you’d be hard-pressed to top what’s served at Lindo Michoacan. But don’t let its fiery looks deceive you—the chili-red broth offers the comforting richness of all good soups, without being overspiced. Pozole, after all, gets you through the day.