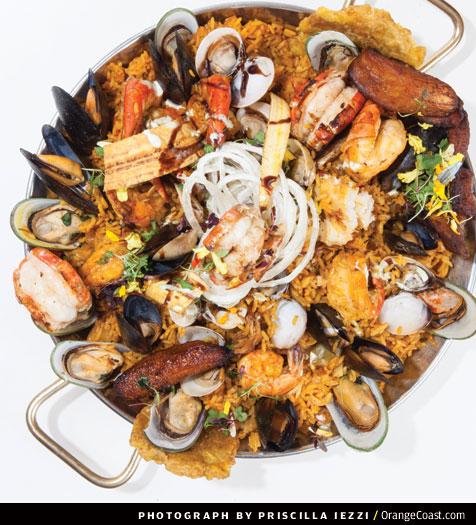 Confined mostly to tapas-inspired bites and dishes beset by a fusion of Iberian flavors, Spanish cuisine is rare in Orange County. So it’s no wonder that finding a good paella—rice stained a glorious saffron, seafood plump with its own briny juices—can be so difficult. Luckily, local diners aren’t limited to traditional paella. Consider one of the dish’s many Spanish-speaking variations.

Moros has fast become one of O.C.’s finest Cuban restaurants. You’ll find two paellas here, including one loaded with expertly cooked clams, mussels, fish, and calamari. But spend a few more dollars for the Valenciana and you’ll get all that seafood plus chicken and chorizo. And in a nod to Cuba’s Caribbean climate, you’ll get a few hunks of sweet, caramelized plantain on the side.

Stashed in a Stanton shopping center is Chicama, an unassuming place that does away with all that faux exoticism of other Peruvian restaurants, and focuses on flavor. The arroz con mariscos is a lot like the paella at Moros. But opt for the fantastic arroz con pollo, tender rotisserie chicken alongside cilantro-infused rice finished with a bit of Peruvian beer. It’s not paella per se, but squirt on the restaurant’s outrageously addictive green rocoto chile sauce and you won’t want to put your fork down.

Olé! Spain Delishop provides a truly Spanish experience. Beyond ham-packed sandwiches and picnic-ready pasta salads, it offers a simple but admirable paella studded primarily with shrimp and chorizo. When you’re done, grab a piece of the wonderful flan for yet another slice of Spain.

Photographs by Priscilla Iezzi
This article originally appeared in the May 2014 issue.