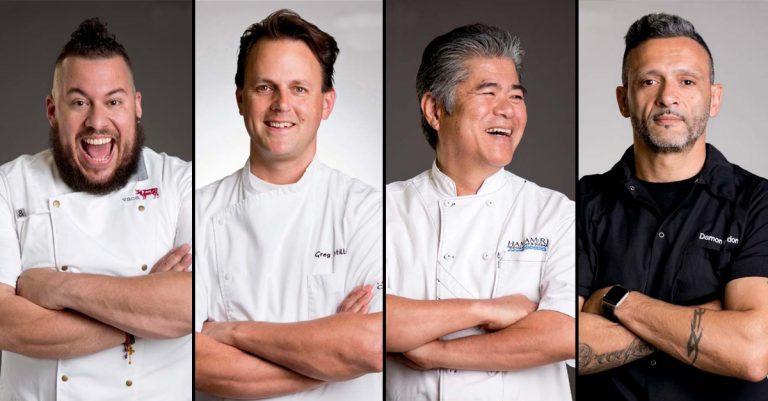 Who imagined a time when chefs would be as admired as movie stars or pro athletes? Today these apron-bearing leaders are a topic to serious eaters. Here’s a look at four of South Coast Plaza’s culinary standouts. Life-changing moment?
There’s a few: First, my family moved to New York City when I was 13. I got interested in cooking and got into C-CAP (Careers through Culinary Arts Program), which led to a full scholarship to the Culinary Institute of America. Second, moving to California to open Charlie Palmer at Bloomingdale’s South Coast Plaza. Ahmed Labbate was working for Charlie in Las Vegas, and he came aboard as GM. Putting us together was the beginning of an incredible partnership. Third, Season 13 of Bravo’s Top Chef. It was a personal challenge—chef friends had done it and I wanted to push myself. It made sense from a business perspective, as Broadway was then five years old and we were ready to open Vaca. It was money-can’t-buy exposure.

A memorable dish at another restaurant?
I recently discovered Garlic & Chives in Little Saigon—love the toothpick lamb.

Name a favorite fall ingredient.
Squash. It’s versatile. From savory to sweet. Soups, roasted, desserts. And there’s so many varieties.

Early food memories and how they shaped your palate?
We had specialties in the Dominican Republic and a couple of my mom’s dishes are on the Vaca menu: La Bola—a crispy potato ball with ground beef and spicy tomato sauce—and Mama Santana flan. But when I was growing up, I always liked taking dishes to the next level, experimenting with additional spicing, vinegar and such, intensifying flavors. Life-changing moment?
In 1974, at the age of 17, I moved to New York to open the first conveyor belt sushi restaurant in the U.S., Genroku Sushi. Automation then was nothing like it is now. The restaurant was located in Midtown Manhattan—close to the Empire State Building. I had lived in Tokyo, so I was accustomed to a big city. But to be there, in the midseventies, as a teenager was incredible.

Favorite dish on your menu?
The uni shooter. The textures and flavors are great: uni, quail egg, ponzu.

A memorable dish at another restaurant?
The pop-up dinners Dee Nguyen does at Break of Dawn. There’s nothing like that going on in OC. Incredibly creative multi-course tasting menus.

Name a favorite fall ingredient.
Black truffles, which are harvested in late autumn and winter. I don’t use them out of season. A slice beautifully complements a scallop or sea bream in sushi or sashimi.

Hamamori celebrates 10 years in December. Have you noticed changes in the guests?
Much more omakase now, which is all about trust. You build a rapport with both new guests and regulars. Sushi fans have become more adventurous. We recently brought in golden eye snapper and Nodoguro black throat sea perch from Japan; guests loved them. At what point did you decide to pursue a degree in Culinary Arts?
I wanted to be a professional soccer player, but always enjoyed cooking with my mum. It was my senior year in high school when I decided that I wanted to pursue the culinary arts.

Favorite dish on Water Grill’s menu?
One that stands out is our slow-cooked Spanish octopus. It’s a classic combination with tomato and olives, but we add a twist with feta cheese. We use two cooking techniques, slow-burning then finish on the Josper grill over charcoal to create a subtle, smoky flavor to complement the tenderness and light char of the octopus.

How did your childhood in England influence your style of cooking?
I was lucky and trained under Michael Roux, Alain Ducasse and Marco Pierre White in England. Plus, my father is Guyanese, so it also has a Caribbean influence.

Name a favorite fall ingredient.
Wild mushrooms. They epitomize fall and are multifunctional. You can eat them raw, pickled, grilled or sautéed, and they pair with almost anything. Mushrooms can be mild-tasting to robust.

You have a big culinary staff at Water Grill South Coast Plaza—how do you ensure consistency and quality in the kitchen?
Working on the line with the sous chefs during the day and at service is the best way. Lead by example. Where did you earn your culinary degree?
The Culinary Institute of America in New York. I also received my Certificate of Baking and Pastry from C.I.A.

Tell us about your decision to explore pastry, even pursuing an additional degree in it.
I thought in order to be a well-rounded chef, knowledge of pastry was an absolute must. I believe many cooks would be better off if they understood pastry better.

What’s your favorite dish on Leatherby’s menu?
I don’t have favorites, just brief infatuations. Then I move on to something else rather quickly.

What fall ingredients will you incorporate into Leatherby’s menu?
All the usual fall suspects like butternut squash, Brussels sprouts, parsnips, cauliflowers of all sorts, root vegetables, lentils, pomegranates, cranberries and pumpkins.

Hamilton will run at SCFTA next May; what ideas do you have for the Broadway-themed menu?
There will be dishes named after major theme songs which will add a political twist to each course.

What have you learned from your mentors, including Thomas Keller and Joachim Splichal?
Thomas: Cleanliness is next to godliness. Organization is the key to life. Food quality and proper method is key.
Joachim: Learn to fly by the seat of your pants; you won’t be disappointed.