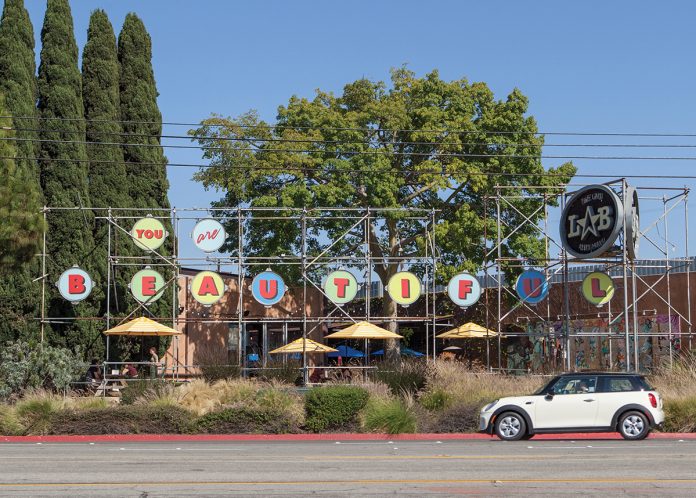 These O.C. frontrunners, each with its own audience and lively groove, paved the way for our insatiable hunger for food halls.

The Lab/The Camp
By now it fits seamlessly into the ever-hip fabric of Costa Mesa, but when it opened in 1993, The Lab was strikingly edgy: a closed factory on a little-thought-of block on Bristol Street transformed into the Anti-Mall. Linda and Shaheen Sadeghi, coming from careers in the surfwear industry, gathered independent small businesses in an artsy, visually stimulating environment, betting that the worldly, eco-oriented, chain-averse customers they’d designed for and sold to would respond. In 2002, The Camp opened across the street with a tenant mix that has shaken out over time to become more food and less retail—with the selection no less carefully curated and reflective of the Sadeghis’ belief that customers seek a social experience rather than one that’s solely about food. “The Packing House, and hopefully all our projects, carry this same DNA,” Linda says. 2930 Bristol St., thelab.com; 2937 Bristol St., thecampsite.com The reinvigoration of underused, sometimes historical sites is an important part of the story of modern food halls, with San Francisco’s Ferry Building Marketplace the best-known example. In a corner of Costa Mesa, what formerly was a sad, failing shopping center now is South Coast Collection, with OC Mix at its heart. In 2011, Andrea Young brought the multi-tenant OC Mix idea to the site, signing Portola Coffee Lab as her first lessee (Young and husband Russell have since moved on to their Union Market projects). It was the O.C. coffee king’s first location and marked the start of the Mix’s slightly squiggly timeline that loops in The Cheese Shop, Shuck Oyster Bar, and most notably chef Carlos Salgado’s award-winning Taco Maria, which closed as a food truck and opened as a restaurant here in 2013. 3303-3323 Hyland Ave.,
shoptheocmix.com, southcoastcollection.com

Mitsuwa Marketplace
A bright Japanese supermarket so large that it has its own dedicated parking structure, Mitsuwa Marketplace in Costa Mesa opened in 1989 as Yaohan, assuming its present name in an ownership change in 2006. Food court doesn’t do justice to the pan-Asian restaurant array found inside—the restaurants and the Japanese retail shops that form an outer ring around them feel like a trip to Asia for the price of a bowl of noodles. Separate stores and restaurants inside a supermarket? Chains from Japan, such as Santouka Ramen? And curry rice lunch specials? When it opened, there was nothing like it in O.C. Throngs of young scenesters mixed happily with families and office denizens in the communal eating area of what now looks like a vision of our food-hall future. 665 Paularino Ave., mitsuwa.com

Wholesome Choice
In 2003, Wholesome Choice supermarket opened in Irvine, serving a burgeoning Persian population while also aiming for global inclusiveness. From the start it was the huge, vibrant food court and sangak flatbread bakery that wowed. There was comfort food made in the Persian, Indian, Italian, Chinese, and Thai traditions, consumed at outside tables or toted away in stacked containers. With the need to achieve cuisine consensus eliminated, office lunch had never been so easy. Unlike Mitsuwa and the modern food halls, where each restaurant is an individual business, the food stalls here are all operated under the vast, multicultural umbrella of Wholesome Choice. 18040 Culver Drive, wholesomechoice.com Old Vine Café Unexpectedly polished seasonal dishes from a teensy kitchen with a soft spot for Italian fare at dinner, French toast at breakfast. The Camp