Home 2018 Black Napkins: Where Are They Now? 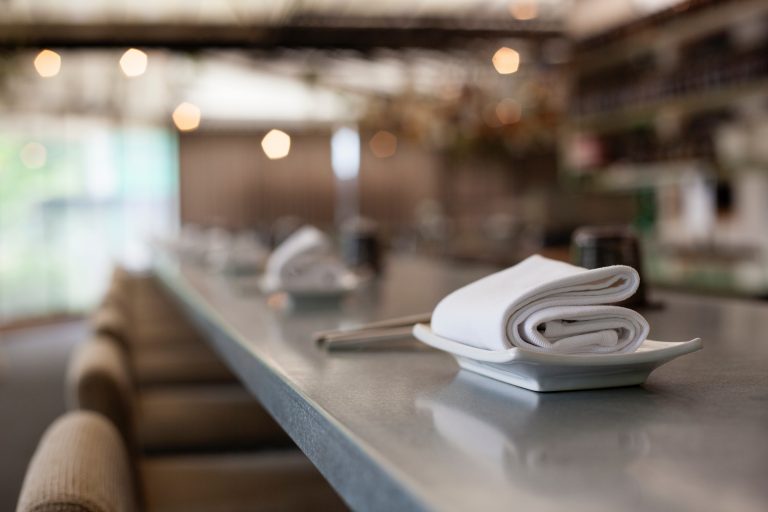 The idea was to keep your clothes clean without leaving a linty mess, but are black napkins still useful or are they pretentious relics of the past?

The New Yorker magazine ponders the question in this week’s issue, citing a 1998 story in Orange Coast: “Upon arrival at the Pavilion restaurant, a greeter immediately identifies guests wearing dark attire and replaces their napkin with black ones at the table.”

“At Oak Grill, we have many business executives dining with us for breakfast and lunch, where the black napkin is more requested. At night, we see more couples and groups of friends with someone inevitably requesting a black napkin, but not as much as during the day,” Valles says. “We’ve learned to provide black napkins in advance to our regulars whom we know are more comfortable with the darker napkin and do our best to anticipate the black napkin need for those wearing dark colors.”

We decided to take this moment to check in on the current status of the fuzzy furor. For many restaurants today, black or dark napkins as part of a theme or overall design have replaced white entirely, eliminating any need to swap out napkins for diners. At The Cannery in Newport Beach, navy napkins fit nicely into the restaurant’s nautical theme.

“We use a lint-free brown napkin at Studio for all of our guests, so we rarely see a request or need for a black napkin,” says Ben Martinek, chef de cuisine at Studio at the Montage Laguna Beach. “However, should someone ask, we always have black napkins on hand, just in case.”

Others will gladly swap them as diners wish.

“The challenge is finding nice black napkins that are cotton and won’t fade when they’re laundered,” said Ahmed Labbate, managing partner at Vaca in Costa Mesa. “The polyester ones don’t wipe anything! So we do the on-request approach.”

And still others are seeing a decline in requests for black napkins.

“After we present the menus at the table, we offer black napkins to our guests who are wearing dark clothing to give them the option,” says Chad Sisco, general manager at Selanne Steak Tavern in Laguna Beach. “Over the years, I’ve noticed a decline in black-napkin requests. It could just be in Laguna Beach, but I don’t see the black-napkin request as often as I did 10 years ago.”

Orange Coast restaurant critic Gretchen Kurz finds black napkins offered far less than she used to, as “a nod to the gesture-based, polished service that used to be far more common. They are a welcome touch.”

“As someone who dines out frequently and wears a lot of black, I appreciate the gesture of a black napkin,” says Lee Healy of Lee Healy Marketing Communications. “The quality of the white cotton napkins has improved over the years, but they still can leave lint. It (providing black napkins) shows restaurant management cares.”