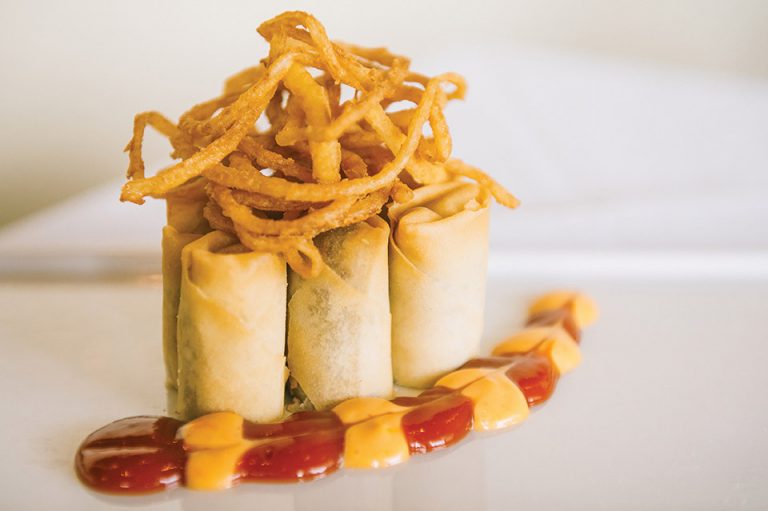 It makes sense to go to Davio’s, a Northern Italian steakhouse in Irvine, for its pasta, pizza, paninis, pesce, and Prime aged steaks. Yet a whole menu section is devoted to … spring rolls! There are Italian-influenced versions, such as chicken Parm with marinara, but topping the list are Philly cheesesteak spring rolls with homemade cayenne-spiced ketchup and mayo; shrimp cotija spring rolls are flagrantly un-Italian, too. How popular are the Davio’s spring rolls? They’re also sold frozen and in the prepared-food sections at scores of markets on the East Coast, and at Bristol Farms, Gelson’s, and Costco in Orange County. 18420 Von Karman Ave., Irvine, 949-477-4810.

Turmeric, the yellow spice often used in curries, is said to be an anti-inflammatory, a pain reliever, a digestive—and an antioxidant that might protect your liver from toxins. Health-goers will often get their daily dose with a turmeric supplement but why not also in a fun drink. So how brilliant is a turmeric margarita? Or better yet, an orange turmeric margarita made with fresh-squeezed fruit, organic tequila, Cointreau Noir, turmeric-infused aguamiel, and a turmeric-Tajín rim? It’s part of a new super-foods cocktail program at Taco Rosa; in this case, your liver might thank you as much as your taste buds will. 2632 San Miguel Drive, Newport Beach, 949-720-0980; 13792 Jamboree Road, Irvine, 714-505-6080.