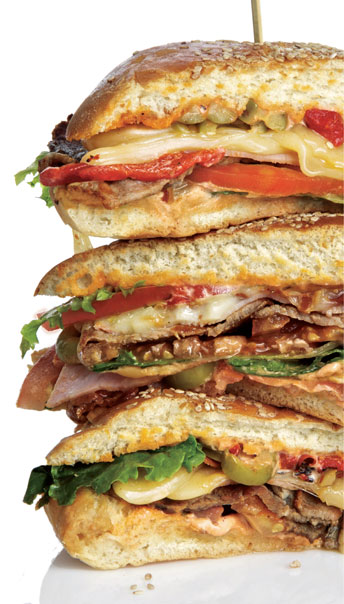 In Orange County, Argentine sandwiches have a cult all their own. Waves of European immigration have shaped the country’s cooking, leaving an obvious Italian influence on most menus. So you’ll find Argentine pizzas, pastas, and sandwiches stuffed with ribbons of prosciutto and all manner of Italian-style cured meats. Among O.C.’s many Argentine sandwiches, however, are some distinctly South American creations.

Puerto Madero Meat Market’s chivito is a thing of legend. It packs the market each weekday, drawing Santa Ana’s hungriest lunchers. They park in front of the cluster of TVs tuned to soccer as they attack these stacks. Each is an architectural marvel: supple sesame seed roll overflowing with choices that include thinly sliced steak, ham, bacon, lettuce, tomato, briny green olives, roasted red peppers, and a mass of melted cheese. Every layer is expertly prepared.

There’s a similar ambience at El Gaucho Market—a small sandwich counter inside this equally small Anaheim store. Here you’ll find the classically Argentine matambre. Stuffed inside a freshly baked roll are slices of the matambre itself—a mass of steak rolled around hardboiled eggs, vegetables, and herbs. It’s roasted, then sheared into deli-thin rounds. Dab some vinegary chimichurri onto the sandwich for maximum effect.

Del Tomate in Tustin makes virtually everything in-house, including its excellent pastas and desserts (order some alfajores, the Argentine shortbread cookies filled with dulce de leche, to go). As for the sandwiches, try the quintessentially Argentine choripán: crusty ciabatta bread loaded with lettuce, tomato, mayonnaise, and a freshly griddled sausage that needs only a quick douse of chimichurri to make a perfect brunch.