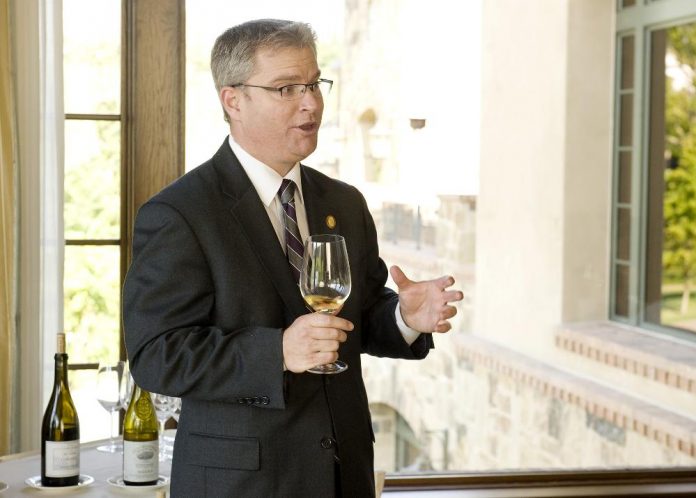 It’s one of the most anticipated wine events of the year in Orange County so you don’t want to miss “Keep The Promise,” a tasting to benefit The Wooden Floor, the Santa Ana dance studio that helps underprivileged youth complete high school and continue on to college. It’s a great cause, but it’s also a great opportunity to taste rare wines. This is the event’s fifth anniversary and John Markley and his wife Janice, who always roll out an incredible group of wines, have outdone themselves this year, enlisting the help of Master Sommelier Steven Poe, right.

It’s not just a roundup of the usual California superstars—it’s a chance to get a crash course on one of the greatest wine regions in Europe. “Chateauneuf du Pape is the star,” said Poe, as he previewed a list of 14 wines, seven white and seven red, each with an average rating of 95 or more points and retail prices of up to $110 per bottle. That’s an incredible value when compared to California cult wines and top Bordeaux.

He considers Rhones a perfect bridge for those who love the fruitiness of California wines but would like to expand their palates. He posed the question, “How are you going to serve Rhones when your friends are expecting Rombauer Chardonnay?” Then he answered it with a stellar tasting that included 14 wines, no less than seven Rhones from 2007, a vintage Robert Parker has called the greatest in 30 years for that region.

The whites showed luxuriant textures and fresh fruit flavors, balanced with subtle minerality. “The 2007 Chateau de Beaucastel has hints of marzipan, almond paste, and white peach.  It doesn’t smell like a California chardonnay, but the body weight is reminiscent of a chardonnay,” he said. Then he guided tasters through the reds that possessed outstanding power as well as finesse. His kicky descriptors were anything but academic. “The 2007 Domaine de Ferrand. It’s a bus driving over a stick of butter with cherry pie and passion fruit!”

A little over the top? Tasting is believing. So see for yourself when they start pouring from the list, which will also include two wines from Paso Robles’ Tablas Creek. The event allows guests to taste wines twice, the second time blind, to see if they can identify them. I guarantee you’ll have trouble picking out the American wines because they are definitely made in a classic Rhone style.

If you love wine, save the date, and if you’re a South of France fan call all your Rhone Ranger buddies and tell them to clear their calendars, too. The tasting will begin at 6 p.m. on Oct. 6 in Newport Beach. Click this link for details and get ready to have John Markley rock your world with this year’s parade of elegant crowd pleasers.