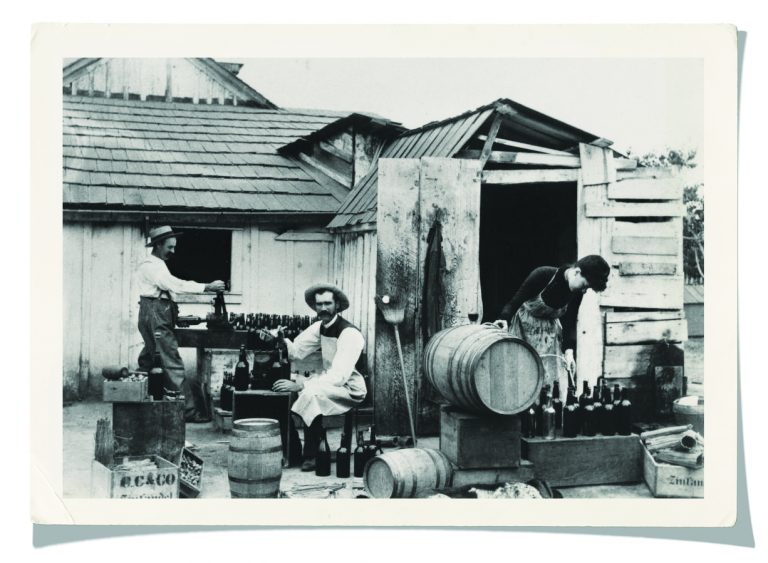 Napa wasn’t always California’s premier winemaking region. In 1859, Anaheim was home to the largest colony of vineyards in the world. Starting with the city’s purchase of 1,165 dry and brushy acres from Juan Pacifico Ontiveros for $2 an acre, the land was divided into 20-acre parcels, planted with Mission grape cuttings, and irrigated by water from the Santa Ana River. The parcels were sold as homesteads to German immigrants who were disenchanted with life in San Francisco or disillusioned by the Gold Rush. They were eager for a fresh start, and though none of the colonists were farmers, the vineyards flourished and the community expanded with lumberyards, schools, and churches. By 1884, Anaheim’s German settlers produced 1.25 million gallons of wine, along with 100,000 gallons of brandy. Clearly, the wine was consumed for more than religious sacraments. Success on a grand scale took only 20 years, but total failure, in the form of insect-related blight, decimated the vineyards soon afterward. Citrus and walnut orchards later followed, but Anaheim’s fame dimmed—until 1955, when Mickey Mouse put it back on the world stage.
BULLARD WINERY, ANAHEIM
CIRCA 1885