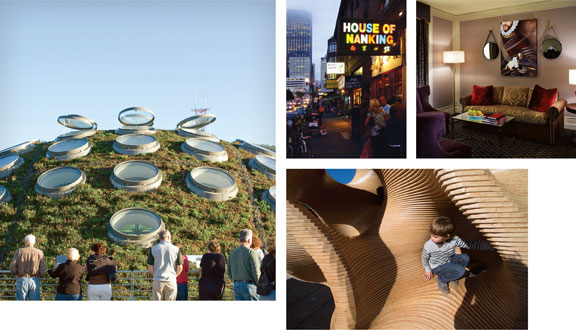 With its spectacular waterfront, compact footprint, thrill-ride cable cars, and tourist-friendly vibe, San Francisco during the holidays is a real-life theme park—and easily navigable on foot, even with a stroller. By midmonth, look for festive lighting at top attractions such as the Union Square Ice Rink and Ghirardelli Square. Unusual museums, an abundance of food, and those magical cable cars chugging so purposefully make it one of the few cities that’s as appealing to grownups as to children. Even familiar sites such as the Ferry Building, AT&T Park, and the Golden Gate Bridge seem new when seen through a child’s eyes.

SEE
The  California Academy of Sciences ($25 to $35) in Golden Gate Park is as exciting as its name is dreary. The facility packs an aquarium, planetarium, natural history museum, and four-story rainforest under its plant-dense living roof. Another must-see at its new Pier 15 location: the  Exploratorium (free to $25), a wonderland of cool science—robots, skateboard science, optical illusions. The vintage cable- and streetcars that roll around town are “museums in motion.” Kids can operate the motorman’s controls on a replica 1911 streetcar at the San Francisco Railway Museum (free).

TASTE
Start the day downtown with a decadent breakfast at the Grand Cafe Brasserie, where cardamom-scented whipped cream adorns French Toast ($14), caramelized cauliflower accents a gouda-rich scramble ($15), and slabs of gravlax top a toasted bagel ($16). Climb the hills of Chinatown, then stop for the salt-and-pepper shrimp with mushrooms ($14) and Nanking sesame chicken ($10) at the  House of Nanking. Choose a favorite food stand at the Ferry Building, but all will agree frog hollow farm’s warm-from-the-oven organic fruit pastries ($5 and up) are bites of heaven.

RELAX
With Beefeater doormen, glamorous decor, and a great location along Union Square trolley tracks, the  Sir Francis Drake ($189 to $509) impresses all ages, while the free nightly wine hour, bicycles, and yoga mats add to the entertainment value. The boutique  Argonaut Hotel ($159 to $899) shares a ground floor with the San Francisco Maritime National Historical Park—an engaging exhibit that traces the city’s seafaring past. The luxurious westin st. francis ($249 to $899) in Union Square has a Kids’ Club program, and ample suites with adjoining rooms.

7-Day Passport
The San Francisco City Pass ($84 adult; $59 child) saves nearly half off tickets to the California Academy of Sciences, Aquarium of the Bay, the Exploratorium, and also grants unlimited cable car and Muni rides. citypass.com/san-francisco