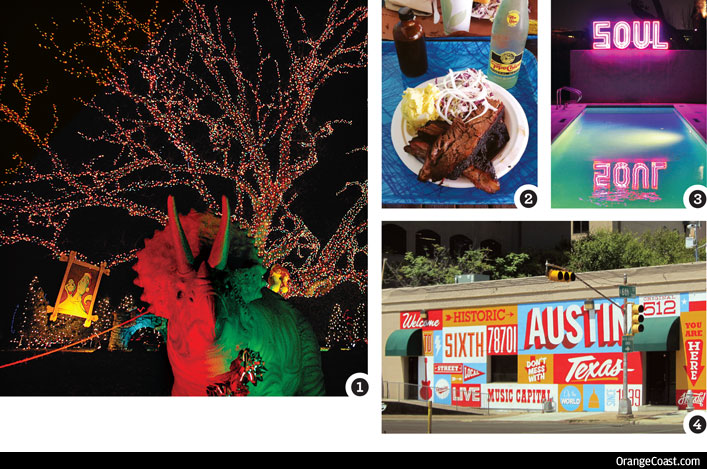 Everything you’d ever want in a city comes together with a dose of weirdness in Austin, making it a fun, almost-warm winter getaway. Like a Southern-fried Portland, this progressive city celebrates all things local, handmade, and artistic in its stores and bazaars. Smart folks from the University of Texas and high-tech businesses coexist with enough musicians to keep the state capital’s more than 250 music venues humming. Immerse yourself in live music at Antone’s, the Continental Club, or the famed Broken Spoke country dance hall. Or just ring in the New Year with a little auld twang syne with late-night bands in downtown bars and at elegant hotel parties.

See
Whatever your taste in music or food, you’ll find it on Sixth Street,a seven-block entertainment artery with a hipster mix of cafes, tattoo parlors, trendy restaurants, and music venues. From Dec. 17 through 24, visit the Armadillo Christmas Bazaar ($7 for adults) at the Palmer Events Center, a long-running art fair and concert featuring jewelry, home decor, great tunes—and beer. Or shop ultralocal at the new Austin Handmade Arts Market on Dec. 14 and 15. The new, 40,000-square-foot home of the Thinkery(free to $9), the latest phase of Austin children’s museum,opens Dec. 7 with a broader focus on science and tech.
Taste
The 42-seat Barley Swine restaurant is named for chef-owner Bryce Gilmore’s favorites—beer and pork—and the James Beard semifinalist’s small-plates menu and beer list emphasize both. Try the duck sausage with barley, foie gras, mushrooms, and onions ($18). Within months of the simple brisket stand’s opening, Aaron Franklin’s  Franklin Barbecue was named the nation’s best ’cue by Bon Appetit in 2010. Sample pork, turkey, or sausage by the plate or the pound ($11 to $17) and finish with a slice of pecan or lemon chess pie ($4). Caveat: Lines are long, and the brisket sells out daily.

Relax
With no two rooms alike, any stay at the  Hotel Saint Cecilia ($385 to $635) is unique, thanks to its quirky Victorian-mod-Bohemian decor. The wooded estate-turned-hotel offers 14 suites, bungalows, and studios, and a neon-lit pool in the South Congress District. Spin vintage vinyl on a turntable, or browse the library’s books and films. Downtown’s Driskill Hotel ($359 and up) is an 1886 baroque monument to cattle baron opulence: marble, stained glass, and mounted steer heads. The October opening of Hotel Ella ($249 and up) marks the return of a historic mansion as a 48-room luxury hotel.


This article originally appeared in the December 2013 issue.