The air in Hawai‘i is amazing—it’s clean, warm, and fragrant. Inhale deeply, and you might smell white ginger, frangipani, or wait—is that a whiff of buttered popcorn? Yes, that’s the scent of another island delight: the movie festival. Because Hawai‘i is not only a fabulous place to watch hula and surfing, it’s also a great place to enjoy a world-class film festival. Here are the major film events that take place in Hawai‘i, and hey, pass the popcorn.

HAWAI‘I INTERNATIONAL FILM FESTIVAL PRESENTED BY HALEKULANI
Serious—and seriously fun—the Hawai‘i International Film Festival Presented by Halekulani is a pioneer in presenting films from the Pacific and Asia. “We screen more than 200 films a year,” says HIFF’s executive director, Robert Lambeth. The 2014 festival is Oct. 30 to Nov. 9 on O‘ahu, and then HIFF brings a traveling program of eight to 10 films to the Big Island and Kaua‘i from Nov. 13 to 6. If you’re not movied-out, the Spring Showcase (April 10 to 16, 2015), offers films fresh from the Sundance and Berlin fests. HIFF has a rabid following for its mix of international movies, industry business and swanky parties. HIFF also has 25 free workshops and seminars, such as a master’s acting class with Marcia Gay Harden. hiff.org.

BIG ISLAND FILM FESTIVAL
Movie Maker Magazine called the Big Island Film Festival one of the “25 Coolest Film Festivals,” and it’s easy to see why. BIFF takes place over Memorial Day weekend and is held at the Fairmont Orchid, a 32-acre luxury resort on the Kohala Coast. Rough, we know. One of the most popular events is an annual screenwriting seminar with producer/writer Ron Osborn of West Wing fame. According to the festival’s director, Leo Sears, “A lot of patrons plan their vacation around BIFF, because not only do we have wonderful beaches and a great host hotel but if they stay longer than the festival, there’s so much to explore on the island.” May 21 to 25, 2015. bigislandfilmfestival.com.

MAUI FILM FESTIVAL
There’s something luminous about the Maui Film Festival, held in Wailea. Some of it is the glow from the 50-foot-wide screen at the Celestial Cinema, an outdoor venue that by day is the Wailea Gold and Emerald Golf Course. And some of it comes from sheer star wattage, with celebrities like Lupita Nyong’o, William H. Macy and Jake Gyllenhaal in attendance. The festival is sponsored by Dolby, and as such, always has incredible sound systems that enhance the outdoor screenings. “We’ve been called the best place on Earth to watch a movie,” says festival director Barry Rivers. Dates are being firmed up for June 2015; keep an eye on mauifilmfestival.com for details.

KAUA‘I
HIFF brings a traveling festival to Kaua‘i from Nov. 13 to 16. Kaua‘i has been used as a location for more than 60 feature films. Don’t miss the chance to take a movie tour to see the places used for films like The Descendants and Raiders of the Lost Ark.

MOLOKA‘I
Tranquil Moloka‘i has also been used for movie locations, such as for the filming of Pirates of the Caribbean: At World’s End and the Jurassic Park series. Its film festival is on hiatus, but may be back soon. by Kathryn Drury Wagner – See more at: http://www.orangecoast.com/promotions/2014/08/26/now-playing-in-paradise#sthash.5BhOLDep.dpuf 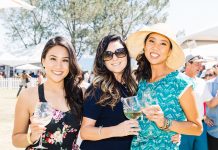 Move More and Eat Healthy at Meet on Beach 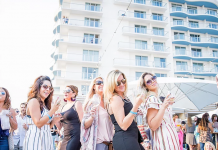