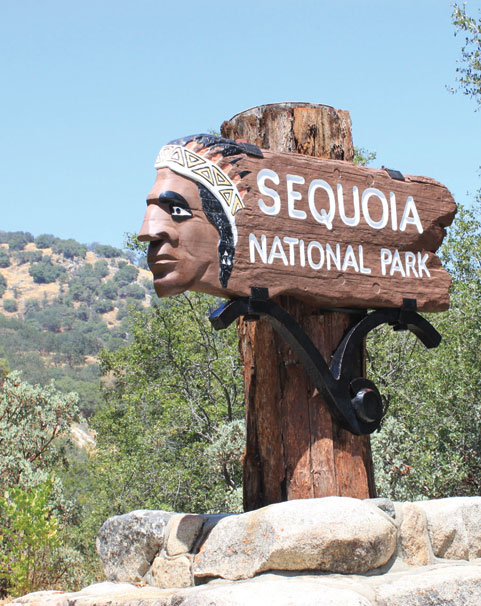 Certain that ancient trees had a higher purpose than becoming fence posts and shingles, George W. Stewart, the 21-year-old city editor of the Visalia Delta, penned an 1878 editorial calling for a state ban on cutting giant sequoias. For the next dozen years, the newspaperman battled mining, livestock, and timber interests, and spurred state and federal officials to secure the park’s first 76 square miles.

Today’s park, nine times larger, rewards the hardiest of hikers with meadows, alpine lakes, and the snowcapped Sierra Nevada, and offers motorists on the Generals Highway one sequoia grove after another.

To stand alone before the General Sherman Tree as dawn breaks is to be humbled. Just you, the echo of a persistent woodpecker in the distance, and the largest living thing on Earth. The ideal opportunity to ponder your place in the universe.

Established
1890
Only Yellowstone is older.

Area
631 square miles, or slightly smalled than Kings Canyon, with which it’s been jointly administered since 1943

Camping
$18 to $20 per site per night.
Seven campgrounds with 573 sites and four group sites, some reserveable at recreation.gov; additional campgrounds in the nearby national forest and national monument.

Lodging
Wuksachi Lodge ($200 to $300), with 102 units, was built in 1999 to replace accommodations that had worn out their welcome at Big Tree Trail. Clean, well-appointed rooms. The bartender makes a mean manhattan ($10) at The Peaks, the restaurant off the lobby. Our menu picks: pan-seared trout ($26) and the prix fixe flat-iron dinner ($34).

Nearby Lodging
Montecito Sequoia Lodge, between Sequoia and Kings Canyon, is a year-round resort geared for families and groups. Water skiing, horseback riding, snowshoeing, an other activities are guaranteed to entertain the kids. Three Rivers offers dozens of guest cottages and bed-and-breakfasts. The Sequoia View Cottage with views of the Great Western Divide through a wall of windows, sleeps four ($180 for two; $20 per extra person).

Animal Oddity
Most flights of the Northern flying squirrel are a few feet between trees, but glides of 100 yards have been reported.

Plant Oddity No. 1
Horticulturalists announced last fall that they had successfully cloned a genetic replica of the dying 130-year-old sequoia Muir planted at his ranch in Martinez.

Plant Oddity No. 2
The seed of a giant sequoia is about as big as a flake of oatmeal. Only one in 1 billion grows into a mature tree. Why? Seeds only germinate in mineral-rich soil with full sun. Without frequent fires,  are needed to eliminate the shade-loving competition. Large trees need large amounts of water and stream-side real estate is limited.

Precipitation
A trace in June through August, to 7 to 8 inches in December through February.

Photographs by Razvan Marescu
This article originally appeared in the May 2014 issue.