You might remember Patridge as Lauren Conrad’s friend on MTV’s “The Hills”—a spinoff of “Laguna Beach: The Real Orange County.” Her rocky relationship with motorcycle-riding Justin Bobby was a prominent storyline. Now, nearly 10 years later, Patridge is back in O.C. (she grew up in Yorba Linda), has her own swimwear line, and is busy raising a toddler as a single parent. Catch her on “The Hills: New Beginnings” with new cast members and even more drama.

➜ Living in O.C.
When I was pregnant with Kirra, I wanted to be closer to my family and raise my daughter in Orange County, where I grew up. Living here again for the past couple of years and going to all my old spots and seeing people from high school—it’s nice to be home.

➜ “The Hills” Reboot
It’s definitely a bigger cast, and I’m not going to lie, it has been a wild ride! There is so much more drama than there ever has been. And it’s different now because a lot of us have children, and we’re either married or divorced. We make a joke of it like, “We’re adulting now.”

➜ Filming in O.C.
We filmed in (Orange County) a lot, actually. We filmed all over Newport, Huntington, Laguna, and Yorba Linda. It’ll be fun to watch because in (“The Hills”) there really wasn’t any of O.C. in it; it was all based in L.A. So it’s kind of like taking it back to my roots.

➜ Watching herself on TV
I hated watching myself on the old show. When I was hosting the NBC travel show (“1st Look”), I was used to it, but it was about something else. But now it’s about me again, so it’s a little nerve-wracking. That’s the thing with reality TV: You film it, and then you have to relive everything again.

➜ Designing her swim line, Prey
I wanted it to be feminine but sexy and have different cuts and styles. It has been a really fun experience but challenging.

➜ Being a single mom on the show
You won’t see me for long in certain scenes just because I had to get back to my daughter; being a single mom, I have more responsibility. It’s about re-establishing my life and really refocusing and doing what’s best for my daughter and me. This time around, I’m way more mature, and I see things very differently.

➜ What she would tell her younger self
I would tell myself to stay away from all the troublemakers and the people who just want to fight. That’s still kind of what I’m dealing with now. It’s draining. Everyone is so opinionated, and there’s a lot of talking behind each other’s backs. 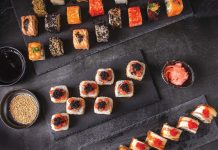