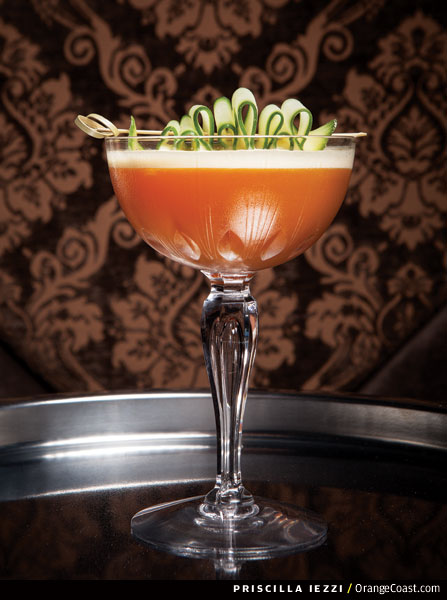 The revival continues for cocktails inspired by the golden, boozy pre-Prohibition era, along with variations on established classics, such as the Manhattan and the Boston sour. Here are six great bars in Orange County where old meets new in handcrafted cocktails.

1. Arc
Noah Blom’s slick and moody wood-fire restaurant is the perfect backdrop for sultry yesteryear-inspired elixirs such as The Duchess, left, with Earl Grey-infused Pimms No. 1, Swedish punsch, and orange and lime juices, topped with a ribbon of cucumber. For an updated take on the daiquiri, the Peary is a fine choice, made with Cuban rum, Comice pear, pineapple juice, and pear tincture; the fruity notes shine, but don’t overwhelm. For something with more bite and depth, there’s the Three’s Company, with bourbon, sherry, Gran Classico, and house-made Onyx bitters—served over hand-cut ice. $12. 3321 Hyland Ave., Costa Mesa, 949-500-5561, arcrestaurant.com

2. Napa Rose
Strange, yes, that an amusement park is serving some of the county’s best cocktails. Disney’s Napa Rose yields inventive libations with such a balance of flavors and complexity that even burly classics, such as the Penicillin and the Manhattan, go down easily. The keen-eyed also may notice a little black book behind the bar, its pages full of handwritten recipes for drinks with quirky names. Ask for the Seven-Mile Bridge, made with Smith & Cross rum, Carpano Antica, Licor 43, lime juice, orgeat, and bitters with a grapefruit twist. It’s a little tiki, but refreshing. $10 to $12. Complimentary valet for five hours. Disney’s Grand Californian Hotel, 1600 S. Disneyland Drive, Anaheim, 714-300-7170, disneyland.com

3. 320 Main
This is where local bartenders go for a drink—the men behind this bar are serious about the craft of cocktails. Some standouts: the Fifth Stage, made with Pernod Absinthe, pineapple, lime, orgeat, and cucumber; and the Crippled Creek, with Angel’s Envy bourbon, pomegranate molasses, fresh lemon juice, Dijon mustard, and a cucumber slice. The mustard adds a zippy, savory boost to the crisp drink. Play like you’re in the know and order some off-menu stars such as the M-80, with tequila, fresh ginger juice, mezcal, and simple syrup; or the Scuttlebutt, with Bulleit Rye, Licor 43, Gran Classico, lemon juice, and a grapefruit twist. $10 to $12. 320 Main St., Seal Beach, 562-799-6246, 320mainsealbeach.com

4. Little Sparrow
Santa Ana’s sleekest drinking establishment offers a list of 24 cocktails that pay homage to all the early favorites, from Gin and Whiskey Bucks to Rum Swizzles and the almighty Sazerac. The Tongue & Cheek is a great rum sour with spiced Fijian rum, pine liqueur, lemon, ginger, and egg white, while the potent Le Petite Mort, with French whiskey, Averna, espresso, and house-made bitters, may not be for the faint of palate. $9 to $13. 300 N. Main St., Santa Ana, 714-265-7640, littlesparrowcafe.com

5. Pie Society
This hidden bar at Pitfire Pizza is more cool den than murky speak-easy, but it boasts a respectable selection of sours—cocktails typically made with a base spirit, lime, and sweetener. Of the eight on the menu, the Boston Sour, with bourbon and rye whiskey, lemon juice, simple syrup, egg white, bitters mist, and an orange peel garnish, is the standout. The coolest is a reimagined Negroni called the Art of the Kill, with Death’s Door gin, Gran Classico, Cynar, and a tangerine peel twist, stirred and poured over a block of ice—it definitely has a bracing edge. $10 to $12. 353 E. 17th St., Costa Mesa, 949-313-6335, piesocietybar.com

6. Broadway by Amar Santana
Order the Blindfolded Bowman, with Don Q Añejo rum, Smith & Cross, Amontillado sherry, grilled pineapple syrup, orgeat, and lime juice. Almost too pretty to drink, it arrives in a coupe glass with tiny edible flowers bobbing at the surface. Also ask for Broadway’s version of the Sazerac, made with Turbinado sugar instead of the traditional sugar cube, and a blend of rye and cognac instead of absinthe. It’s a modern take on one of the most defining drinks of the pre-Prohibition period. $10 to $14. 328 Glenneyre St., Laguna Beach, 949-715-8234, broadwaybyamarsantana.com