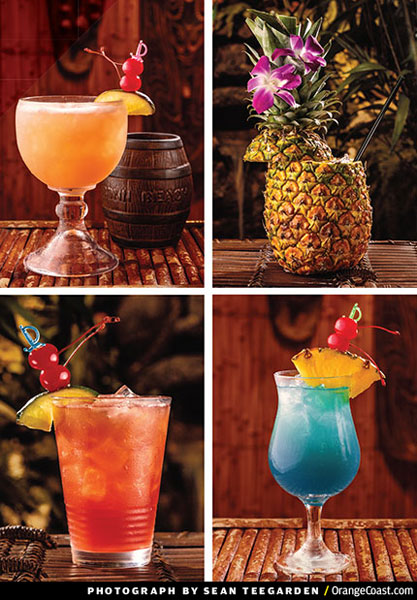 Though some regard them as overly cloying concoctions, tiki cocktails such as mai tais and zombies are enjoying a resurgence in Orange County. Craft bartenders layer the rum-based drinks with multiple spirits and spices to create beguiling and complex potions. Here are five great places to get your tiki on.

1. Don the Beachcomber
Named after Donn Beach, the founding father of tiki-themed restaurants and bars, this longtime favorite is a kitschy-cool Polynesian escape with its torches, pufferfish lanterns, thatched huts, and tikis galore. The menu lists more than 20 traditional and modern cocktails, left, including Beach’s original recipes for signature classics such as the mai tai and the rum barrel. The Painkiller, made with coconut milk, orange juice, and Pusser’s Royal Navy Rum, has a frothy top flecked with ground nutmeg. It’s pure tropical goodness that goes down smooth. The Dr. Funk features citrus and anisette with Jamaican rum for a mouthpuckeringly tart libation. Or test your mettle with a zombie. Made with Lemon Hart 151—a bold Demerara rum—it packs a punch so mean that there’s a limit of two per person. $9 to $17. 16278 Pacific Coast Highway, Huntington Beach, 562-592-1321, donthebeachcomber.com

2. 320 Main
The tiki force is strong with this boisterous neighborhood bar. Tiki Tuesdays feature $8 tropical drink specials and Tiki Throwdowns, which challenge local guest bartenders to whip up their best creations. Must-tries include off-menu offerings such as the Ancient Mariner, a tart and tangy drink doused with Banks 5 Island and Smith & Cross rums, along with fresh grapefruit and lime juices, allspice dram, and cane syrup. The Three Dots & a Dash is particularly pleasing on the tongue, with Martinican and Demerara rums, honey, orange juice, house-made falernum (a delightful, holiday-esque syrup that can contain rum, ginger, lime, almond, allspice, and clove) and pimento dram. It’s crowned with a garnish of three Luxardo maraschino cherries and a pineapple wedge. $10 to $12. 320 Main St., Seal Beach, 562-799-6246, 320mainsealbeach.com

3. Trader Sam’s Enchanted Tiki Bar
A bar with Disney special effects? Yes, please. We won’t spoil the surprise, but let’s just say fun things happen when you order certain drinks such as the Uh Oa!, with light and dark rums, falernum, cinnamon, and orange, passion fruit, guava, pineapple, grapefruit, and lime juices. And watch out for flashing lights and rumblings of “volcanic activity” if you ask for the Krakatoa Punch, with spiced rums, orgeat (almond syrup), hibiscus grenadine, and Sam’s Gorilla Grog, which is a mix of passionfruit, guava, pineapple, orange, and lemon juices with falernum. The rest of the drink menu has similarly goofy names. Try not to trip over your tongue ordering the HippopotoMai-Tai. $9 to $14. Disneyland Hotel, 1150 Magic Way, Anaheim, 714-778-6600, disneyland.com

Photograph by Sean Teegarden
This article originally appeared in the September 2014 issue.