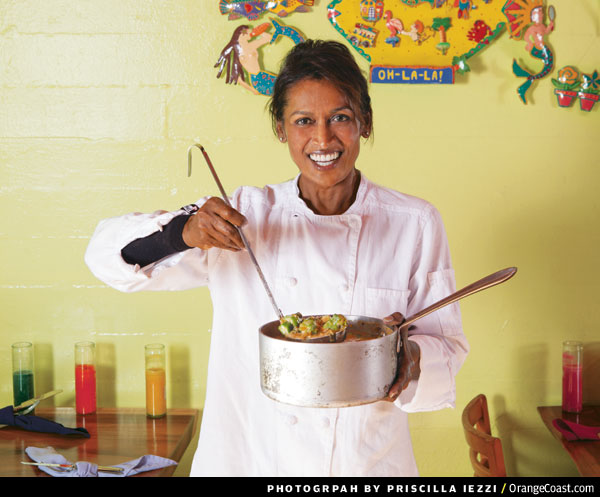 There’s nothing like the warmth of soup to soothe the misery of a cold or flu. Whether it’s a light broth or hearty porridge, it’s a universally nurturing remedy. If mom’s not around to prepare her famous homemade chicken soup, these five Orange County options are the next-best thing.

1. Eva’s Caribbean Kitchen
Known for her fiery island fare and rum cocktails in a cozy setting, Eva Madray, above, also serves up a delightful Trinidadian elixir called callaloo, made with a lobster-and-clam base, spinach, okra, thyme, garlic, shallots, and coconut milk—a beautiful soup with deep, rich flavors. You’ll discover a cup is not nearly enough to satisfy; invest in a bowl. Or several. $5 to $7. 31732 S. Coast Highway, Laguna Beach, 949-499-6311, evascaribbeankitchen.com

2. Canton Restaurant
Since 1987, this small house of soup has been offering divine bowls of chao ca, a milky-white rice porridge with silky strips of mild whitefish, crowned with freshly shredded ginger and chopped green onions. Each creamy spoonful is like a savory salve—you can feel its restorative power. The tender, light snapper doesn’t dominate the flavor of the porridge. And the ginger and scallions add wonderful zing. Cash only. $6. 8550 Westminster Blvd., Westminster, 714-892-2022

4. Bangkok Taste
Need something to revive your muted tastebuds? Tom yum gai soup may be just the trick. Spiked with fragrant lemongrass, galangal, straw mushrooms, dark-meat chicken (you can ask for white), chili, and fish sauce, the soup delivers a potent mix of sour, spicy, and tangy that will bring your senses back to life. Make it a heartier meal by ladling the soup over a bowl of steamed white rice. $8 to $12. 2737 N. Grand Ave., Santa Ana, 714-532-2216

5. Kappo Sui
For a light, delicate soup, order the zosui at this authentic Japanese pub. It’s beautifully presented in a heavy stone bowl covered with a lid. The thin soup comes with scattered bits of rice and pale yellow swirls of cooked egg, while supple shiitake mushrooms lend a pleasant earthy scent. Finish with a mug of green tea to boost your energy. $7. 20070 Santa Ana Ave., Costa Mesa, 714-429-0141, kapposui.com