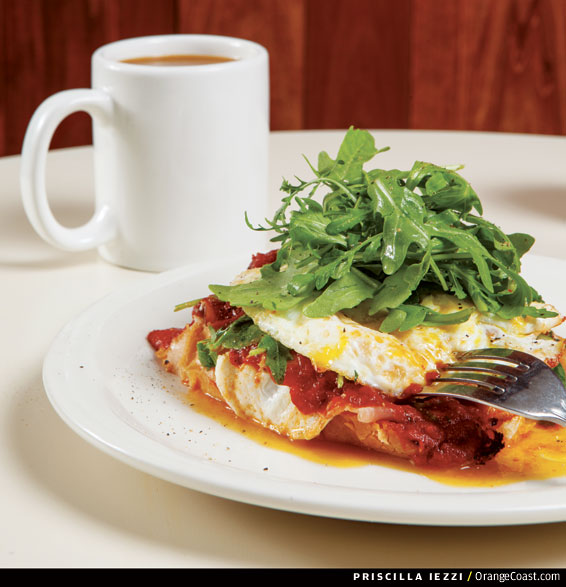 For many of us, weekends are for sleeping in and enjoying sumptuous breakfasts that can last until late afternoon—and perhaps a mimosa or two to round out the affair. Here are six restaurants where you can stroll in for a great not-quite-breakfast, not-quite-lunch experience.

1. Eat Chow
Some of Orange County’s best breakfast sandwiches can be found at this spot. The Fried Egg, left, is open-faced on a baguette with two eggs over medium, razor-thin prosciutto, fresh mozzarella, truffle oil, a thin marinara, and lemon-tossed arugula—it’s superb. So is the Breakfast BLTA, with fried eggs, applewood smoked bacon, mixed greens, tomato, avocado, and house-made chipotle aioli, tucked into toasted brioche. We can’t not mention the hefty AM Burger, with grass-fed chuck, bacon, fried egg, and crispy fried onions—you may need to cut it in half. Brunch ends at 12:30 p.m., but the Red-Eye Luis cocktail, a take on the michelada with Modelo Especial and house-made bloody mary, makes it worth arriving early. $8 to $12 per entree. 1802 Newport Blvd., Costa Mesa, 949-650-2469, eatchownow.com

2. Motif at St. Regis
You could do worse on a Sunday than sitting in a posh seaside resort gazing at the blue Pacific. Start with a complimentary shooter of zesty bloody mary, and then indulge at the sprawling buffet: sushi, ceviche, oysters on the half shell, poke, crab claws, dumplings, Korean BBQ short ribs, omelet and carving stations, cheese, and charcuterie. The French toast and pancake station offers 50 toppings. Impressive desserts include macarons, minicupcakes, cobblers, cookies, tarts, ice creams, and sorbets. And don’t forget the fresh-made crepes. $79 with unlimited Champagne, $69 without; $35 per child (ages 5 to 12). 1 Monarch Beach Resort, Dana Point, 949-234-3900, stregismb.com

3. Early Bird
A bona fide North County gem, this chef-driven eatery produced a seasonal offering so popular they had to make it permanent: the Pork Belly Benedict, with house-cured meat, housemade pickles, and an English muffin with poached eggs topped with Sriracha hollandaise. The Brioche French Toast is a thing of beauty: two stacked brioche blocks with a dollop of Granny Smith applesauce and orange butter—all dusted with powdered sugar. Douse it with Early Bird’s house syrup. $5 to $13 per entree. 1000 Bastanchury Road, Fullerton, 714-529-4100, earlybirdoc.com

4. Fleming’s Prime Steakhouse & Wine Bar
Fleming’s new brunch service starts with warm and flaky house-made biscuits with butter and apricot preserves, a memorable start to your meal. And leave it to the classic steakhouse to offer a Filet Mignon Eggs Benedict. It’s pretty grand, and so is the cocktail cart that’s wheeled to your table for the making of your piquant bloody mary. The lemon ricotta pancakes, delicately tart and fluffy, are not to be missed. $15 to $23 per entree. 455 Newport Center Drive, Newport Beach, 949-720-9633, flemingssteakhouse.com

5. Sol Cocina
There’s plenty to watch at this bayside Baja-inspired restaurant, from yachts to kayakers and stand-up paddle boarders gliding across the glittering water. Other eye-candy includes the Soufflé Carlotta. It’s French toast-meets-bread pudding with a caramelized exterior that gives way to a gooey, piping-hot interior. The extensive cocktail list includes mimosas ($3) and nearly a dozen margaritas ($8 to $18). Our pick? The Frozen Beer—a frosty mug of frozen margarita topped with a float of ice-cold Tecate—the perfect grown-up slushy. $11 to $18 per entree. 251 E. Pacific Coast Highway, Newport Beach, 949-675-9800, solcocina.com

6. Lucca Cafe
In addition to Lucca’s house-made, fresh-from-the-oven cinnamon rolls (which usually sell out by noon), a highlight of your meal could be server Adolfo Perez, who exemplifies what a neighborhood bistro should be with his exceedingly warm and gracious service. Then there’s chef Cathy Pavlos’ Pain Perdu—thick slabs of challah French toast topped with toasted pecans, and the clincher, a drizzle of aromatic vanilla-orange creme fraiche. It’s divine. $10 to $14 per entree. 6507 Quail Hill Parkway, Irvine, 949-725-1773, luccacafe.com