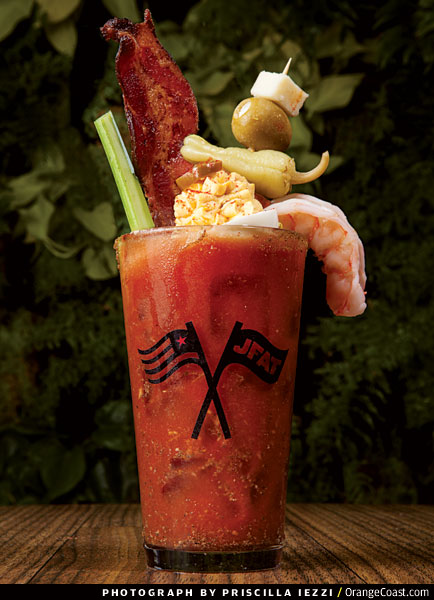 Get your vegetables and booze in one convenient—and delicious—serving with what’s been hailed as America’s murkiest and most complex cocktail. Traditionally made with tomato juice, vodka, celery salt, horseradish, Worcestershire, and Tabasco, its origins are widely debated. Here are five superb O.C. renditions of the world-famous drink.

1. Jimmy’s Famous American Tavern
This boisterous neighborhood gastropub delivers a one-two punch with its substantial drink. Arriving in a pint glass, the Meal Mary, left, comes with an amazing spectacle atop it: a skewer jam-packed with Fontina cheese, pepperoncini, a stuffed olive, a shrimp, and a deviled egg. There’s also a thick slice of bacon that stays shatteringly crisp to the last sip, and the requisite celery stalk. Save room for the actual drink: a house-made mix with thick tomato juice and zesty spices. You’ll be hard-pressed to find a better bloody mary. $15 for Meal Mary; $10 for regular drink. 25001 Dana Point Harbor Drive, Dana Point, 949-388-8900, j-fat.com

2. Lobby Lounge
at St. Regis Monarch Beach
Lore has it that in 1934, Fernand Petiot took his original bloody mary recipe to the St. Regis Hotel in New York, where he perfected it. Today, find not one, but six marys at the resort, starting with the Red Snapper made with Ketel One vodka, tomato juice, fresh horseradish, Worcestershire, and lime. Served in a glass goblet rimmed with celery salt, it’s adorned simply with a leafy celery stalk and a toothpick of pimento olives. The robust and piquant drink is a great balance of savory and tangy. Craving more heat? There’s the Aloha Mary, with organic vodka, Sriracha, wasabi powder, and Clamato juice. The dramatic ocean view from the balcony isn’t too shabby either. $16 each; $5 parking with validation; 1 Monarch Beach Resort, Dana Point, 949-234-3900, stregismb.com

3. Taps Fish House & Brewery
The longtime steakhouse and seafood restaurant claims it has the “world’s greatest bloody mary.” If not it, it’s close. The from-scratch mix—freshly ground horseradish, shallots, A.1. steak sauce, Tabasco, Worcestershire, lemon, and orange juice—is shaken with Skyy vodka for a hearty libation that’s not too thick. Jutting out of the drink is a 9-inch skewer holding a tomolive (pickled tomato), cherry tomato, olive, a chunk of dill pickle, sweet salad pepper, pepperoncini, and a plump shrimp. The Cream Ale beer back that arrives with it may be the perfect chaser. $10. 101 E. Imperial Highway, Brea, 714-257-0101, tapsfishhouse.com

4. 320 Main
The classic gets a modern update here—in addition to the standard tomato juice, vodka, and Worcestershire, Sriracha replaces the traditional Tabasco, caper juice is added in lieu of a salted rim, and there’s also cumin, which lends a hint of smokiness to the melange of flavors. This drink is for those who may be bored with the classic bloody mary, and ideal for nursing a hangover. No overload of fancy garnishes here, just a celery stick and an olive—the better to save room for, say, brunch. $12; 320 Main St., Seal Beach, 562-799-6246, 320mainsealbeach.com

5. Ramos House Cafe
The bloody mary is the star of this historic and charming eatery. Made with Soju (a Korean variation on vodka) and Clamato juice, the cocktail is presented with what looks like an alien bouquet growing out of it. Upon closer inspection, you’ll see it’s a crab claw piercing a Scotch egg—a hard-boiled, deep-fried quail egg wrapped in bacon and glazed with zesty mustard sauce. Pickled green and wax beans also hang over the rim of the glass. The drink itself is light, not too spicy, and slightly sweet. $13; 31752 Los Rios St., San Juan Capistrano, 949-443-1342, ramoshouse.com

Photograph by Priscilla Iezzi
This article originally appeared in the March 2014 issue.