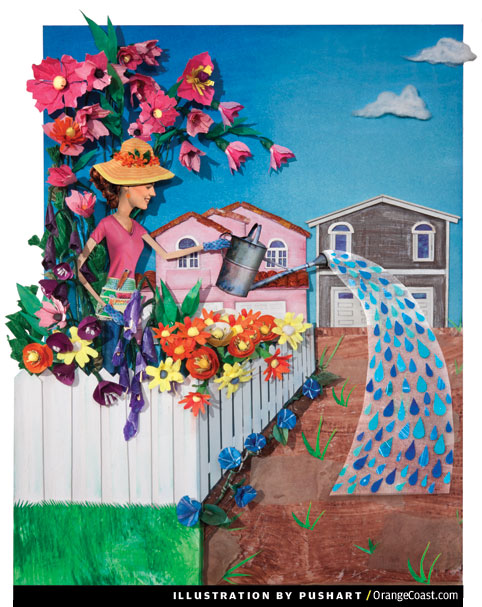 When the family next door moved out 15 years ago, they left behind a potted ficus. For weeks, the tree stood by the trash, begging to be watered. I dragged it to our courtyard and flooded it. It came back. Green buds became leaves. Twigs grew into branches.

A year later, that plant-abandoning neighbor—a fit, 40-ish man in black-rimmed glasses with black hair combed straight back, who hadn’t sold the house but
rented it out—knocked on our back door.

I was stunned. “Excuse me?”

“The ficus,” he said, nodding in the direction of my adopted, now-thriving tree.

Was it his tree, or was it mine because I had saved it and brought it back to life? Confrontation makes me uncomfortable, and he was aggressive, so I made a sweeping gesture and said, “Take it.”

And he did. No “Thank you for saving my tree,” or “I owe you one.” He hefted it in his arms and disappeared around the corner of the garage. And thus began a grudge I nursed for 14 years, until last year, when Ficus Man kicked out the renters and moved back in. He still had the slicked back hair and black-rimmed glasses, but he was alone. No wife, no kids. Just him.

In our little beach community, the houses are so close you could play chess through your windows if you wanted. You hear sneezes, phone conversations, and more—too much more. So, through his kitchen window (across from our bathroom window) I heard him speak the D-word to a friend. He was divorced. On the phone he was yelling at someone who, by his tone, had to be the ex.

Had he forgotten to water his marriage?

The ficus didn’t come back with him. Had it died? Or had he done the right thing and planted it where it was gloriously thriving?

Still stewing 14 years later, I refused to acknowledge Ficus Man, even when he sat on his front patio just over the low fence from our yard. Yet, I was working on a memoir about forgiveness, and unless I wanted to be a hypocrite, it was time to let it rest.

I began to mumble hello when I saw him, and when I watered our garden, I also watered the dozen palm, banana, and rubber trees planted around his small yard by his former tenant—although never when he was on his patio. Their leaves were browning.

One day while I futzed around our garden and he read the paper at his patio table, we accidentally made eye contact.

“Pretty yard you have there,” he said.

“Thanks,” I said, then added, “You know, I’ve been watering your trees.”

“I keep meaning to put in a sprinkler system.”
“The trees are beautiful,” I continued, “but you have to water them or, well, they’ll die.” Hint, hint.

He mumbled something like yeah, he knew that, and I turned my attention back to my cherry tomato plant.

Days passed and he still didn’t pick up the hose. When I watered my plants, I’d glance over the fence to see if the dirt around his trees looked moist, but it was always dry. So I’d turn the hose nozzle to “jet” and shoot a stream of water to the farthest tree. Yet I was still annoyed. I was taking care of his trees again.

“Don’t you think he should water his own property?” I ranted to my husband, Brian. “Should I stop watering?”

“That’s between you and the trees.”

I figured Ficus Man was beyond hope. But then landscapers installed a sprinkler system in his yard. Little nozzles rose from the dirt in the bricked-framed flower bed against his house and in the plot of land between the sidewalk and curb. No nozzles appeared along the strip of trees, though.

He was beyond beyond hope.

I planned to have a talk with him, but I could never find the right time. And then I decided to let it go. Why cause conflict? He’s right next door, I reasoned: If the conversation goes south, living next door could be a bigger drag than it already was. Plus, I enjoyed his trees. If they died, I’d miss them.

So I continued to water. Winter came, and along with it, enough rain to keep the trees healthy. Winter became spring. Brian took over watering the front yard, and the trees next door. He also began getting chummy with Ficus Man.

This past April, before I flew east for a conference, I asked Brian to find out what happened to the ficus. When I returned, Brian relayed Ficus Man’s response: “What tree?”

After my husband had related my recollection of what happened, our neighbor had responded: “That was 20 years ago!”

“Well, he thinks it was 20, and he doesn’t even remember coming for it. I told him you’ve thought about it all these years, but he can’t remember.”

Did I dream it?

Also, in his understated way, Brian cajoled Ficus Man into watering. I didn’t harbor any hope that he’d continue, but when my husband watered, he reported the dirt around the trees next door looked damp. And every so often I heard the hose.

A couple of weeks ago his house was tented for termites. All weekend it was dark and silent. No more mistaking his land line’s ring for our own. No more hearing him and his friends hoot and holler over televised games. And I … missed him! I missed Ficus Man. Well, glory be, wonder of wonders.

Our sibling relationships affect our future relationships more than we’d like, and breaking up with our best friends can leave scars for life. But what about the people we see every day, even only if in passing, and whose most intimate goings-on we sometimes overhear?

Here, and in every neighborhood, little spats and grudges can last for years, if not forever. Rarely do bad situations turn good. Rarer still are those neighbors you begin to appreciate. The termite tent came down. Ficus Man was back in the house, and I was glad. We passed each other on the street and said hearty hellos.

Then one recent weekend, I planted morning glory seedlings along our fence, but on his side. The dirt on our side was packed solid while his was loose. Yesterday he was on his patio. I called hello, and said, “By the way, I planted some flowers on your side of the fence. I hope that’s OK.”

He nodded. “It’s nice having green things out here. I’ll do more one day, but sure, of course. I’ll even water them.”

He and I may never exchange more than a few words in passing. And he doesn’t know that my long grudge has ended. But I know. And for now, that’s enough.