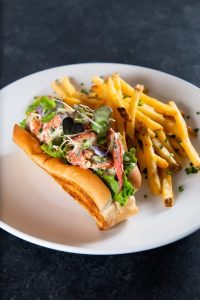 The new restaurant aims to convey the allure of Old Hollywood and a modern speakeasy. Scarlet features a contemporary black and white décor, gilded trimmings, and a 16-seat quartzite bar with velvet chairs. The kitchen is exhibition-style, with 14-foot windows giving diners a first-hand look at what’s being created. 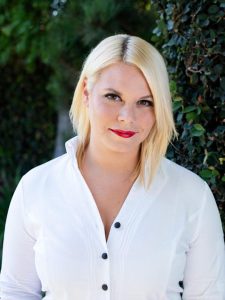 Scarlet Kitchen & Lounge is run by chef and owner Paige Riordan. An East Coast native, Riordan formerly cooked in New York farm-to-table restaurants and attended culinary school at Natural Gourmet Institute in New York City. Before that, she was a professional dancer and choreographer.

The chef is making this restaurant a true family affair, with her husband, mother, and father also on board. Incidentally, her father Marty Manley is a former commercial fishing captain who attended culinary school at the Art Institute of Orange County at the same time Riordan was at chef school back East.

Scarlet Kitchen & Lounge is in the Sendero Marketplace at 30865 Gateway Place. It is open nightly from 4 to 10 p.m. and until 2 a.m. Fridays and Saturdays. Plans are in the works for weekend brunch later this year. More info: scarletkl.com