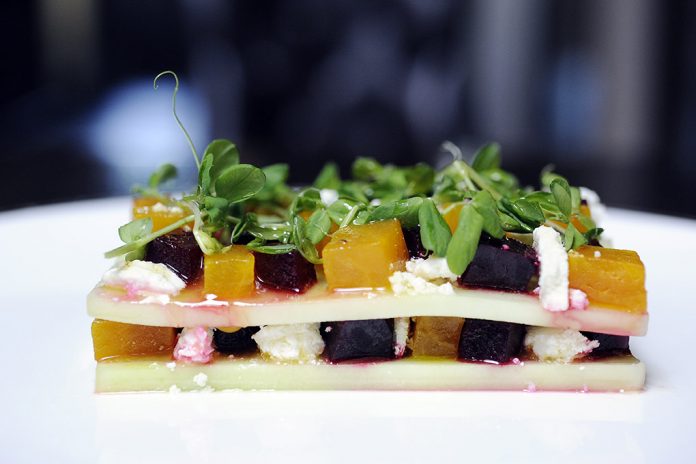 When I hear that Cody Storts, the roving chef of North County, has emerged at yet another Fullerton venue, it’s the spot’s name that first grabs attention: Wreckless. Spellcheck and autocorrect are as baffled as I am. And that logo. Bloody fork tines forming the letter W? It’s audacious branding, I’ll give it that.

Open since November, the place certainly reflects Storts’ fearless, independent style. He has built a local fan base while moving from Hopscotch to Grits to Tempo to Salt & Ash. Thanks to partners Kyle Goerlitz and Ray Hartoutanian, the team goes all in with a super-suave retool of one of old Fullerton’s brick-walled storefronts, in a neighborhood packed with competition. There’s a sparkling wall of whiskeys behind the white marble bar and an open kitchen where Storts cooks the repertoire of dishes he categorizes as “big, bold American comfort food.”

Followers will recognize them as signatures, versions still on menus at kitchens past. Bone marrow toast. Seafood gumbo. Shrimp and grits. Pancake balls. Only now, Wreckless serves them at full throttle—bigger, grander, more expensive. Expect new items too lofty for those previous gigs, including escargot, duck terrine, foie dumplings, bison filet. What seems to be a sprawling menu isn’t so much huge as it is disorganized. It takes time to filter through a quirky layout that lists grilled hanger steak under “the farm” and not “steaks.” And why are sugar-coated buttermilk biscuits with jam under “foreplay” at dinner?

Menu engineering aside, starters at dinner are mostly a shareable lot. Fried burrata, ever-so-lightly breaded and set atop a marinara of roasted tomatoes, flash-fried arugula, and shavings of sharp pecorino is an ace effort. The crispy bright greens bring texture to the fresh cheese, which retains its oozy allure, standing up to the lush sauce. Buttery house-baked brioche sliced nearly 2 inches thick is the lightly toasted base for a shank bone, split canoe-style, to reveal glistening pink marrow that’s undercooked and off-putting, the texture more gelatinous than melted.

The assemblage is dripping in a luxurious bourbon cream sauce, so spreading the marrow on bread is moot and messy. Texture problems also plague the foie dumplings, doused in a nice cognac glaze. They look like gyoza, but the dough is thick and chewy, obliterating the gentle flavors of the foie and pork filling.

Unabashedly rich and indulgent, the menu practically snubs vegetables. This makes the composed salad of cool jade cucumber and vivid cubes of golden and ruby roasted beets an unlikely darling. Wide planks of seedless cucumber, stacked like lasagna, are studded with nuggets of goat cheese, doused with good olive oil, and topped by a billow of pea shoots. It’s pretty, but you’ll have to knock it down to gobble it up. Lightly pickled fruits and veggies on crushed ice is another way to get a tasty dose of garden: young carrots, fresh pear, scallions, onions, and bamboo shoots. Consider these a novel foil for steaks and swanky proteins.

Though the menu gently evolves, items likely to weather the seasons include an impeccable duck breast and a behemoth ribeye that’s aged 45 days. Seared to an even char, the medium-rare, 8-ounce breast arrives piping hot and presliced, arrayed on a bed of well-seasoned riced cauliflower laced with Bing cherries and English peas. At 32 ounces, the dry-aged bone-in ribeye from Washington’s Double R Ranch reigns as the menu’s king of steaks. Though aging intensifies the bold flavor and tenderizes the grain-fed beef, steak this exceptional starts with wise ranching and rigorous grading. Storts grills it to a salty dark char and a warm pink center. True to his style, rivulets of melting foie-cognac butter cascade over it, making every bite an extravagance.

Don’t expect ribeye on the recently debuted weekend brunch menu, but it isn’t missed thanks to a hyper-rich hangover remedy that includes a five-egg omelet with butter-poached mushrooms, four composed “toasts,” and some rotating Benedicts. Sopapilla chilaquiles intrigue, but the waiter can’t describe it, so I take a flyer and instantly regret it once I dig into a mishmash of cooked-down peppers, tomatoes, sunnyside eggs—curiously featuring squares of rock-hard fried dough with a sweet glaze. Instead, order the satisfying Thai balls, ebelskiver-like pastry orbs sassed with maple, shallots, lime, and fish sauce, all buoying a golden, batter-fried Duroc pork loin. It’s rightfully a Storts signature dish. The Patagonia shrimp with white wine butter sauce and coarse-grind grits are top-notch as well.

So far, Wreckless is dizzy from cockeyed ambitions. The ingredients are top shelf, but too many dishes squander the goods. The wine list is striking, but the cocktails are iffy. The logo is everywhere, but hospitality is random. This glossy enterprise needs to be a destination to thrive. That means casting a wide net. Tightening up some holes can only help.

FYI A titanic copper mug holds the 64-ounce Party Mule for your gang of four. Or more.

All photos by Mariah Tauger