It’s a rare event when South Coast Plaza adds a restaurant to its dining portfolio and typically a Very Big Deal for the world class retail destination. But when Tableau quietly debuted as the calendar flipped to 2022, it was easy to miss in the holiday tumult.

Despite the absence of a grand opening or media splash, news of Tableau’s launch spread via customers of Costa Mesa’s Toast Kitchen. Cofounders Ed Lee and chef John Park have a local following there—and those fans scurried to report on their newest Bear Street venture.

Tableau describes its cuisine as New American—a hazy designation to be sure. The fare does defy easy labeling, which I contend is a fabulous and telling predicament. Park’s cooking brims with clever matchups and ingredients we don’t see on menus often, if ever. Take the top-selling fried burrata sandwich with pumpkin seed pesto. Where else have you seen such a dish? There’s also the bounteous açaí bowl with a cast of toppings that includes Marcona almond butter and sweet greens frozen yogurt, which is hardly an ordinary combo. Almost every dish gets an unexpected flourish, say chamomile whipped cream on mixed berry pancakes. Or slices of burnished Chinese sausage tucked into the bowl of shrimp and grits. “Pho-tato” chips seasoned with seven herbs and spices set off a grilled chicken banh mi.

Open early daily, Tableau has two menus covering brunch and dinner, with desserts and beverages always on offer. It’s a gift to finally have a sophisticated pre-noon option in this building. Greek yogurt parfait with hemp granola and candied kumquat tilts hard into breakfast as does a hearty brioche sandwich—fat with bacon, hash, and cheesy scrambled eggs. What a relief the espresso and cappuccino are well above average. Cappuccino arrives in a striking artisan bowl, which somehow converts morning caffeine into an indulgence. Park’s terrific croissant lifts a prosciutto and Brie sandwich beyond its “ham and cheese” title.

Brunch is fertile territory for Park, who is a gifted pastry chef with savory talents honed in prominent L.A. kitchens Providence, Lukshon, and XIV. No wonder the pancakes are soufflé-light, the bagels are house-made, and the crab quiche’s custard and crust are so precise. His riff on chicken and waffles could easily be a signature dish—garlic soy wings teaming with taiyasaki waffles filled with a sweet soy custard that echoes notes of maple syrup. Waldorf chicken salad sandwich is a retro dish Park revives with Fuji apples, roasted grapes, and candied walnuts bound with green goddess dressing. It almost floats between slices of impeccable wheat toast. Yes, there’s a serviceable burger with bacon and white American cheese, but it feels a bit off key on this menu and is undoubtedly a veto dish—an item that placates the difficult diner who threatens to bail on trying a new place.

Dinner commences at 3 p.m. While many daytime dishes reappear, several entrees distinguish the meal. Rigatoni Amatriciana with bright tom yum zing is a revelation, with high volume anchovies, capers, and pancetta in such harmony the dish satisfies without density. Herbaceous green curry mussels are a vivid medley of chorizo and sweet potato with primo levain toast for dunking. Creamy uni bucatini is ultra-rich, though uni flavors are trumped by lardons and a heap of fresh crab. Delightful fried chicken is a bit dainty, but sides of creamed kale, roasted garlic mashers, and jalapeno madeleines compensate handsomely.

Desserts are more or less mandatory here. They’re every bit as exciting and ambitious as any savory fare. The list is small, but without clunkers. Deconstructed lemon meringue pie is tangy curd, graham cracker streusel, and strawberry ice cream served in a deep bowl with a big swipe of toasted meringue on the bowl’s interior. Yuzu granita, matcha gelee cubes, fresh pear, and mint top a lush lemongrass panna cotta. Goat cheesecake gets a sassy assist from grapefruit sorbet. All ice creams and frozen treats are house-made here. If you didn’t leave room, know that tempting baked goodies are displayed at the entrance and sold to-go.

Tastefully revamped from its past life as Seabirds, the interior has a cool, calm, and straightforward vibe. Half walls shield diners from passersby while retaining a faint buzz of marketplace energy. Slide wire canvas shades the outdoor patio, and the10-stool bar stands ready for the forthcoming full liquor license. A tidy wine list fills in for now, but do consider the dazzling low ABV cocktails by Jeffrey Tran, who also devises beverages for Toast.

FYI
Chef dinners at the “giving table” benefit a charity selected by the host. 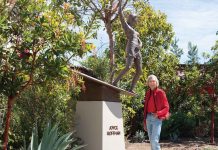 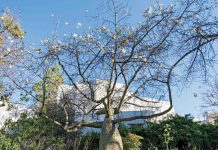