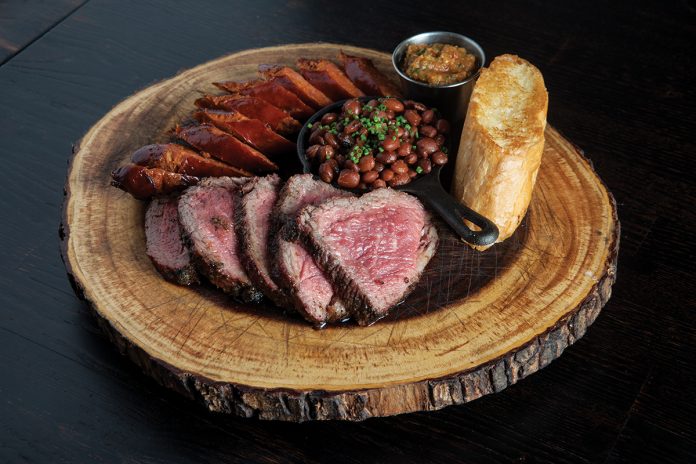 Barbecue, it’s often noted, is the most contentious American cuisine. Regional rivalries can all but tear apart friends and families, relationships momentarily ravaged by feuds over where to find the finest brisket or ribs or pulled pork. Californians don’t much subscribe to the mantras of Texas or the Carolinas, preferring the smoldering live-fire grilling found along our state’s Central Coast. This grilling style has found a new home at Huntington Beach’s SeaSalt Woodfire Grill.

The follow-up to owner Alicia Whitney’s popular SeaLegs Wine Bar, SeaSalt is ostensibly a Santa Maria-style steakhouse where all manner of meat is grilled over open, wood-fired flame. It’s actually something of a hybrid, like a backyard barbecue where the grill happens to be stoked with fresh timber. And so there are bundles of Santa Maria red oak on the back patio, and a window into the kitchen reveals the pit barbecue where naked lobes of tri-tip are suffused with smoke. But this isn’t a steakhouse in the old-school sense—it’s a restaurant for the Pinterest age, where occasional kitchen stumbles can be saved by quirk and charm.

SeaSalt flaunts its meaty intentions. The dining room is decorated with faux vintage paintings of beef, almost as if the wall were ripped from an old butcher’s catalog. The bathroom walls say “Smoke Meat Everyday.” At busy hours, the place thumps with music more befitting a club, occasionally overwhelming the date-night small talk and families who crowd the dining room. But the focus remains on tri-tip, that fickle, triangular cut of sirloin that only a Californian could love.

Appetizers are mostly a communal affair. The tri-tip nachos are a guilty pleasure: sliced tri-tip, cowboy caviar (essentially a corn-studded salsa), diminutive Santa Maria pinquito beans, and Manchego cheese sauce all strewn over a pile of chips. It’s one of those rare dishes that gets better with each new layer of flavor, a messy lattice of tastes and textures that can do little wrong. The shrimp cocktail, meanwhile, is simple and satisfying—six sizable, taut shrimp served with sinus-clearing cocktail sauce.

There’s a full bar that slings what the restaurant calls “farm-crafted cocktails.” The drinks are pleasant but not quite up to the standard of Orange County’s top craft practitioners. If still offered, try the Gin ’n’ Jam, a warm-weather spritz of gin and citrus served with a spoon of raspberry jam to stir in, and the Grilled Piña, a tequila, pineapple, and jalapeño concoction rimmed with black volcanic salt. Better is the concise list of Central Coast wines that focuses on favorites from the likes of the Hitching Post, as well as the selection of craft beers that keeps it local with bottles and taps from Barley Forge and The Bruery.

Servers sometimes struggle to explain the restaurant’s Santa Maria influence, pointing out a menu blurb they hope will do it for them, even though some admit they haven’t read it. But by now the go-to order should be obvious: the tri-tip and linguisa sausage platter. Tri-tip can be difficult to cook, toughening considerably at any point past medium. But the kitchen is more than capable, flame-grilling each piece until a carbonized salt-and-pepper crust forms around a perfect, rosy center. The linguisa, a Portuguese sausage common at Central Coast joints, is snappy and juicy. There’s no sugary barbecue sauce here—every entree from the grill is served with a tiny crock of those pinquito beans, a small cup of fresh salsa, and a wedge of toasted bread. Sometimes the bread has a bit too much crunch, but the beans are a nice touch. And the salsa, a simple, bright pico de gallo, is great with any of the meats.

It might be heresy to Santa Maria’s tri-tip faithful, but SeaSalt’s other cuts are even better. The Spencer steak, essentially a 12-ounce, boneless ribeye with a natural marbling that creates a rush of flavor, is the kind of approachable steak that can convert the most reluctant red-meat eaters. If not, there’s a good grilled half chicken, a supremely tender bird lapped in the flames until its skin reaches a glorious crisp. Each grilled entree comes with finishing salts (smoked maldon, chipotle-lime, etc.) that add a playful, if sometimes unnecessary, touch.

A roster of sides rounds out the menu. The grilled whole cauliflower is probably the most popular, its firm florets just barely blackened and served with a batch of the same molten Manchego cheese sauce that adorns the nachos. Some dishes miss the mark, but there are winners, too, like the freshly shaved corn, dressed elote-style with lime, crema, and smoked paprika, or the pleasantly simple charred broccolini finished with lemon-thyme salt.

The restaurant has rolled out brunch, headlined by the likes of a tri-tip hash, steak and eggs, and other breakfast staples tweaked to the restaurant’s meat-heavy menu. But perhaps more than anything, the midmorning meal is a showcase for the expansive outdoor seating. Here, diners can ring around the restaurant’s fire pit, feeling the ocean breeze.

Dessert includes the campfire-style brownie that arrives still sizzling in its cast-iron pan. Drenched in fudgy chocolate sauce and melted marshmallows, it’s cooled with a scoop of ice cream. There’s also a massive goblet of classic banana pudding, served Southern style. But these aren’t what you come for.

SeaSalt is best over the open flame, those logs of red oak alive with the scent of the Central Coast.