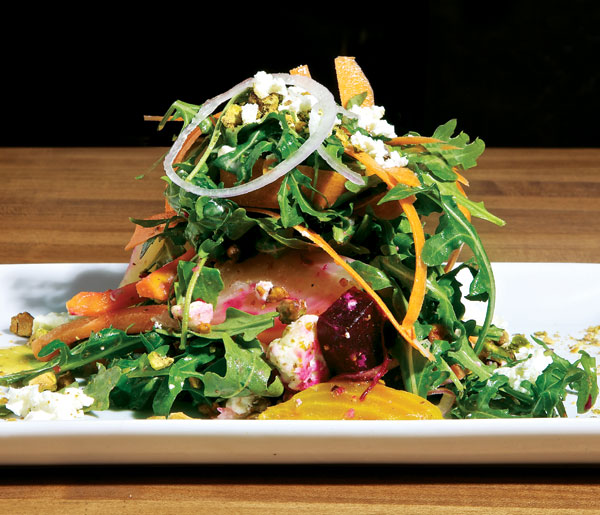 The dusty platitude that “when one door closes, another opens” gets an airing every time a job is lost, an employer goes belly up, or a romance goes south. But when Laguna’s Sorrento Grille closed on chef Ryan Adams last August, he didn’t have to go knocking on doors. He simply opened Three Seventy Common in the same landmark digs ditched by his bankrupt employer, Culinary Adventures.

After more than two years at Sorrento’s stoves, Adams didn’t waste a minute. Closed only two months for a few restaurant nips and tucks, he opened his own watering hole just a short walk from Broadway by Amar Santana, the recent replacement of another longtime Laguna Beach favorite, Five Feet. Does the proximity of these two chef-owned restaurants affect one another’s business? Apparently not, given that on multiple visits, I can see the bar is teeming at one as I squeeze my way into the other. It’s a heartening concentration of new energy in the ’hood.

Free of corporate overlords and directives, Adams blends the site’s inherent advantages—a full bar, a wood-burning grill, a striking street presence—with his personal brand of stout seasonal fare spotlighting local goods. The menu is dense with feel-good, diet-be-damned dishes that ring of modern, globally inspired comfort food. Choices lean toward the hearty. After all, this is a dinner-only destination.

One late night, the bar is lined with folks watching a game on the single flat-screen while a couple huddles near the petite fireplace. Solo customers at the kitchen counter gab with cooks at work. Other diners table-hop, chatting up friends as they come and go through the soaring front door. This is a local crowd, staking its claim before the high season’s out-of-towners descend.

Seeking respite from all the savory salty small plates before us, we dive into a TJ Salad—named for Tijuana, the birthplace of Caesar salad. Crisp, cold romaine leaves get a spare coating of garlicky vinaigrette, a good dose of Asiago, and a fearless punch of anchovy. It’s a lip-smacker, but no escape from sodium. Even the croutons are goosed with capers. Perhaps we should have canceled our pork belly order, but we don’t back down that easily and somehow manage to enjoy the crusty square of pig paunch that’s both chewy and melty. Dried fig bits and a bold citrus vinaigrette are the acidic flavor axle that ensures the plate is empty when it leaves our table.

Loaded with shareable dishes, the menu makes it easy to shun the traditional entrées, which we do by adding a gratin of Brussels sprouts and a mixed plate of cheese and charcuterie. The homespun sprouts seem virtuous in advance of the plate of Fra’mani Salametto slices, creamy pork rillettes, and a voluptuous ripe wedge of triple cream cow’s-milk cheese from Marin French Cheese. I vow my next visit will include less fat and more produce.

That next dinner begins with a complimentary bowl of house-made Chex Mix, so boring that it’s easy to ignore in favor of salads for starters. Roasted beets and plump young carrots are earthy, sweet mouthfuls set off by morsels of mild, velvety goat cheese. Bright lemony dressing makes up for the unexciting humdrum arugula. It’s everywhere these days. This grumble is fast forgotten after a forkful of the fabulous kale salad with pears, walnuts, and grated pecorino hiding tiny plump currants that pop with lush sweetness. It’s a kaleidoscope of contrasts that’s so good, I pray it’s nutritionally noble in some fashion, especially since the two dishes that follow feature foie gras (which will be banned in California after July 1).

First is a terrine, a classic treatment served cold and spreadable with rafts of toasted bread for smearing. Of course it’s ultrarich, but oddly lacking in character and a dish I won’t order here again. At least the next rendition is vastly more nuanced and seductive, the goose liver seared judiciously and set atop just-griddled huckleberry pancakes. A lashing of good maple syrup and a curl of crisp house-cured bacon complete the savory-sweet waltz. Black cod on a bed of lentils, leeks, and chorizo is a delightful entrée. The mild fish flakes into luscious bites that play up the nutty, sausage-infused lentils. Coarse-grind, bacon-wrapped meatloaf with lumpy mashers and mushroom gravy is soulful stuff, sure to spark kitchen-table memories. Roasted cauliflower florets, bronzed on top and creamy inside, get notes of toasty vanilla from a kiss of Banyuls vinegar.

Three Seventy Common doesn’t feel like a newbie finding its way. It’s already comfortable in its own skin. Apparently that can happen when one door closes and the result isn’t panic, but inspiration.

Sunday Social is a three-course supper served family-style, with produce handpicked from the weekend farmers market.
$24 per person, $12 for kids—
but can vary with menu.

This article originally appeared in the May 2012 issue.