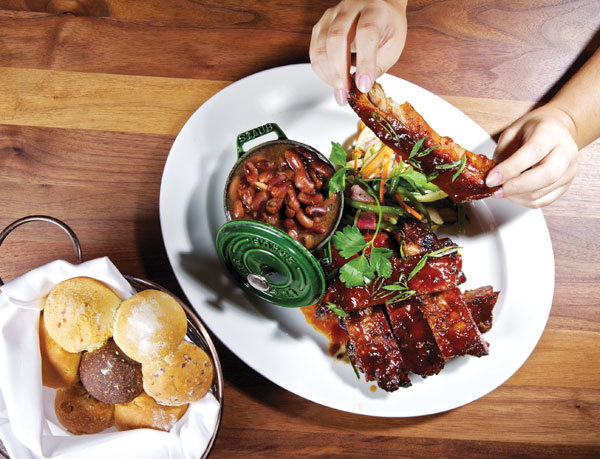 Our chipper hostess at The Saloon announces, “That’ll be a five-dollar cover charge.” We’re just killing time before dining next door at the companion venue, The Ranch, open since January. But waiting for a table is no exemption, so we fork over a ten-spot in exchange for two hand stamps under the watchful eye of a brawny guy with SECURITY emblazoned on his yellow shirt.

It’s early, and the grand dance hall with two colossal bars is just coming to life; couples twirl and two-step to country pop hits playing over an impressive sound system. Wow, those dancers are scary-good, I think, as we sip drinks and nibble deviled eggs.

Mesmerized by the nimble moves of the boot-scooting duos, I figure the $5 cover is more like an entertainment fee. Unlike the folks in the line forming fast outside the door, I’m not wearing cowboy boots, and it’s almost a relief to duck into the restaurant where dining is the main event.

Everything here reeks of brand-new and top-drawer, and no one is happier to show it off than founder Andrew Edwards, even though his dining rooms and kitchen are still works in progress. The Ranch and its adjacent honky-tonk are the ground floor of the six-story world headquarters of Extron Electronics, Edwards’ thriving company. Building this conglomerate—a place for music, dancing, and wining and dining—is the culmination of his longtime dream of giving Orange County something unique.

Greeters consult monitors and one another before leading us to an upper booth in the split-level dining room flanked by a glass-walled kitchen. Our chatty waiter leads a tour through a whopping, somewhat wordy American menu that, like the handsome space, is a mash-up of modern and traditional, down-home and uptown. More than a year in the making, the wine-friendly carte is the work of executive chef Michael Rossi and food-and-beverage vice president and Master Sommelier Michael Jordan, who previously collaborated at Napa Rose. Since April, Rossi’s brother David has been on board as pastry chef.

Tables quickly fill by the time we’re ready to order. Who can say no to starting with warm, poufy, nut-brown popovers? Steam escapes once the eggy pastry clouds are torn open, the crunchy crust absorbing pale butter for a start that revs all the senses. Next, burly fresh Castroville globe artichokes, luscious grilled wedges that come with both a flattering preserved lemon rémoulade for dipping, and a salsa of green olives and pine nuts so intense it’s almost better suited to the dinner rolls. Still, it’s a light opener and easy to share. Delicate sweet potato gnocchi with braised rabbit is stellar, with umami notes of slow-simmered tomatoes and flecks of woodsy maitake mushrooms. Appetizers, soups, and salads make up half the menu, so it’s tempting to fill up fast on seared foie gras with apple bread pudding, generous lobster Cobb salad, stout five-onion soup, or a shellfish ceviche trio. Sharing helps.

In addition to peppering the menu with the provenance of key ingredients, from Petaluma to Idaho to Nova Scotia, The Ranch uses organic produce from owner Edwards’ farm in the Santa Ana Mountains. Oddly, those items aren’t indicated, so do ask about them if you’re curious.

Be sure to check the “chef’s market menu,” four courses of highly seasonal fare (optionally) paired with 3-ounce pours of wine selected by Jordan. One week, the courses are too heavy on sweet elements: Medjool dates pummel the duck pastrami; from-scratch pasta with curried shrimp can’t square with fresh peas, chanterelles, and coconut; and even a sublime Kurobuta pork chop falls prey to the sugary notes of baby onions, sun-dried grapes, and bacon cured with honey and agave syrup. By dessert, even the exquisitely wrought lemon sponge cake with bright tangerines and pomegranate is tough to love because I’m suffering sweet fatigue.

Main courses often shine. Smoked Jidori chicken is a plump, pretty half-bird scented with smoldering maplewood, sitting on a puddle of fresh thyme jus. A rustic, beautifully proportioned bread salad with seasonal greens reveals Rossi’s Italian roots. “Sweet and sticky” spareribs are peel-off-the-bone tender, with a spring bean-and-radish salad for crunchy, tangy assistance. Unctuous Muscovy duck-leg confit takes a detour to France, complete with earthy lentils flecked with house-cured meat and tender baby root vegetables. And though prime rib isn’t always on the menu, you can order it just the way you like since the kitchen packs a high-tech oven that roasts and holds meat at stable heat and humidity levels. Rosy Skuna Bay salmon lives up to its elite status with deep flavors that blossom with careful poaching, so simpatico with a hint of fresh tangerine. Black quinoa provides chewy, fluffy starch, dotted with the jade green of pistachios.

Dessert lovers are in for some treats. David Rossi’s S’more With a Twist recalls the dense, deconstructed delight he offered at Ambrosia before its closing. Strawberry shortcake also reboots a classic, this time pairing moist tres leches cake with the ever-extraordinary Harry’s Berries from Oxnard and a quenelle of hypercreamy caramelized white chocolate. Tahitian vanilla crème brûlée is lovely, but those lemon poppy seed madeleines had me at first bite.

The Ranch is a dazzling enterprise that sprang up in the commercial flatlands of Anaheim, and its genesis recalls aspects of Walt Disney’s midcentury gamble. When completed, Jordan imagines cigars on the penthouse patio after feasts in the private dining rooms. “We’ll be as high as the Disneyland fireworks,” he predicts. A fitting forecast for a venture with its boots on the ground and stars in it sights.