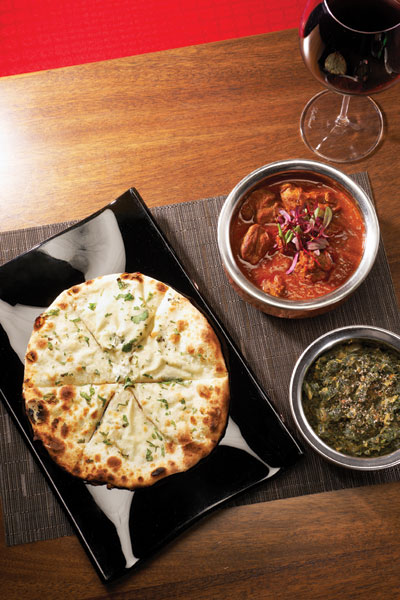 It’s a dark day when an ambitious indie restaurant goes down, but the sting of losing Sage on the Coast fades when word of a world-class replacement for its Crystal Cove Promenade location hits the gastrosphere. Tamarind of London, here in Orange County?

Dripping with juicy lingo such as “Michelin-ranked,” “paradigm shift,” “trendsetter,” and “innovative Indian cuisine,” the canny prelaunch media campaign arouses the foodie contingent in time for the restaurant’s early November opening—replete with a flashy Bollywood bash and VIP dinners.

The welcoming space exudes instant character, thanks to an extensive revamp that erases any reminder of its previous tenant. Cool ocean chic is replaced with alluring, sunset-hued comfort. Brightly lit and gleaming with stainless-steel gear, the open kitchen with an orange hood is a radiant nucleus flanked by richly upholstered booths, a high table for groups, and lower tables for dining in the chiaroscuro garden bar.

Snag one of the 16 stools there and you’ll likely notice a clutch of Crystal Cove locals who use it as a hang for ace libations and sociable chitchat. Both the Ginger Sutra and the Manhattan combine bright flavors and top spirits in careful balance—a fitting kickoff for a culinary adventure.

A dozen starters comprise the biggest category on the menu. Spice-crusted scallops, seared golden, give off the sweet warm scent of star anise and reveal delicate white flesh that’s fork-tender. Loose tomato chutney has a veil of roasted concentration that adds complexity to its tangy flavor. Plump, mild mussels steamed in coconut milk could use more curry leaf to punch up the gentle cooking liquid—it’s a safe dish—and only fuels the craving for something gutsy. A petite serving of chicken tikka is barely enough for three to taste, though the skewered meat is moist from yogurt marinade, and notes of fermented black garlic lift it to slightly above mellow. Pan-fried taro cakes are bland, pasty blocks, and lukewarm at that.

Two salads are bright spots on the list of starters. Crisp rice, crimson pomegranate seeds, and refreshing mango-lime dressing transform baby lettuces into a lovely plate of vivid hues, textures, and pops of flavor. Citrus shrimp and quinoa salad is light on protein, but roasted beets diced small add heft, and fresh orange segments burst with juice that marries the fluffy grain with snips of chive and cilantro. It’s a lovely, modern dish that could be at home on many non-Indian menus.

From there it’s straight to a handful of kebabs and entrées. Because all are a la carte, moving on to main dishes is a fast way to crowd the table top and pump up the tab. Breads, rice, vegetable sides, even chutney and raita are separate orders, each in its own serving dish. Passing around shared items is serious business that takes time and dexterity if diners want to eat their share before hot items cool. This is another departure from old-school Indian meals, and illustrates the value of genteel waiters deftly portioning shared dishes for each diner.

Tandoori-baked naan is a vital player, much like fresh tortillas are key in a Mexican feast, so choices are varied. Triangles of butter naan come in a metal basket, but the tastier goat cheese naan arrives in strips on a plate. They’re good, but lacking the sooty charred bubbles that give the flatbread its addictive crunchy-chew and smoky charm, something you can’t get from Tamarind’s gas-fired tandoor ovens.

The tandoori lamb chops’ red-chili-and-malt-vinegar seasoning is a yummy surprise, but the lamb is too tender, mushy really. One night’s lobster masala also falls short; the nuggets of meat vary from firm to squishy, and the bold sauce masks the lobster’s sweetness. Luscious duck curry is a spicy smash hit, one of the kitchen’s top efforts. Saag that combines kale, spinach, and mustard greens is a wondrous side that’s rich without heaviness. It’s a gem that makes it easy to dismiss the dull smoked eggplant with cumin, again served lukewarm.

Genial service and polished hospitality temper the kitchen’s uneven output. But Tamarind’s fine pedigree of Michelin stars works against this rookie shop by raising expectations that few new restaurants could meet. Time will tell, but for now, this outpost is a wobbly kid brother to its slick sibling.

Best Tables
No. 4, the raised corner booth, and tables Nos. 1 and 2, for watching the kitchen action.

FYI
Chef Shachi was a pre-med student when she found her calling in the kitchen.

This article originally appeared in the April 2012 issue.