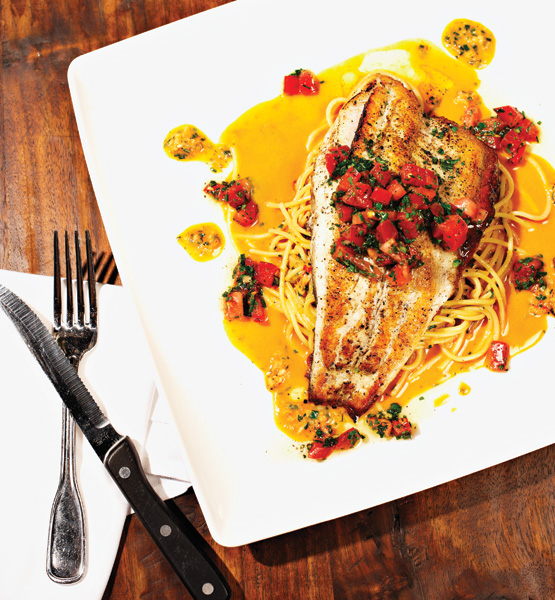 Our eyes grow wide and we are mute until our tablemate breaks the silence. “Wow, it still burns. How long has it been?” She’s referring to the monumental afterburn inflicted by one bite of the Stooopid Fries we’re eating at Red Table, Huntington Harbour’s newest neighborhood tavern.

About 15 to 20 minutes is the consensus of our party. As the heat lingers, I remind them that both the waiter and the menu did warn us about the snack’s ultraspicy nature. Serrano, habanero, and ghost chili don’t scare me, so bring it on, I say. But after five fries I cry uncle before everyone’s palate is obliterated by my reckless choice. Only Teflon taste buds can survive this level of radioactivity.

Between gulps of water, we agree the likely targets for this dish are beer swiggers looking for a bar bet. The theory gains strength when you consider Red Table’s founding chef-owner is veteran local toque Louie Jocson, most recently off a seven-year stint as culinary director for a six-unit chain based in San Diego. Beer-agreeable fare is turf he knows well, and it shows on this long American menu brimming with high-carb snacks, savory share plates, and strapping proteins.

Open since July, Red Table is just what this option-lean neighborhood needs. In fact, what neighborhood wouldn’t welcome a casual new watering hole with a strong chef steering a changing menu of attractively priced selections? Hidden from any well-traveled routes, the shopping center site has zero street presence, but the news is out and the natives are hungry. Service hours are expanding, and additions with a fun factor—a wine-tasting here, a lunchbox special there—are popping up.

Red Table calls itself a gastrobar, a curious conceit given that only beer and wine are served. The cavernous 90-seat space feels warm and hospitable due to a happy hodgepodge of bold design features such as rugged textures, funky lighting, chatty chalkboards, and a long zinc bar. There’s a lot to catch your eye when you’re not checking out the daily specials.

Being a gastro-whatever-you-call-it, it’s no shock that fries stake a goodly claim on the “share” side of the carte, five versions in all. Skinny, crispy sweet potato fries are the standouts, their orange, starchy flesh perfectly done inside crunchy jackets that are a hallmark of “double-dip” frying. Start by dunking one in the bacon-chive aioli; you can’t stop until they’re gone. Skip the Bollywood fries; the weak green curry sauce does little for the hand-cut, finger-size potatoes. Purists will approve the house version with sea salt, cracked pepper, and organic ketchup. Buffalo chicken isn’t finger-licking good, but that’s not a knock. The boneless meat is cut into tidy cubes dusted with spices before frying, making for clean-hands eating alongside sharp blue cheese dressing and crisp carrots, celery, and jicama.

Roasted shishito peppers, almost compulsory on menus these days, make their appearance with crispy prosciutto ribbons and citrus oil, a treatment that flirts with overkill for the subtle peppers. Sparkling fresh slices of albacore get ceviche-like flourishes with cilantro oil and lemon vinaigrette for a dish that’s unexpectedly refined. Puffy dates swathed in bacon show finesse too, partnered with a bitter arugula and a knob of creamy mascarpone. Meatball sliders, a trio of ground beef orbs layered with lively tomato sauce and melted provolone on sturdy fresh buns, hit the sandwich spot. Crisp, fresh pickles—Persian cukes cut in long halves—need more time in a bolder brine.

Spinach salad sports all the likely goodies: red onion, candied pecans, chopped egg, and well-balanced bacon vinaigrette. Not stunning, but earnest and satisfying. Less successful is one day’s lobster mac ’n’ cheese that is bafflingly salty. Lovely to look at, but how did this sodium fiasco ever leave the kitchen? At least the waiter deletes it from our bill of his own accord. Oversalting also plagues the chardonnay butter on otherwise delectable artichoke raviolis. Taken home (sans sauce), they are the next day’s yummy midday nosh.

The win column gets firm boosts from the entrée side of the menu. A sandwich of shaved pork loin and sautéed Tuscan kale is a nice departure, and it’s served on an artisan torpedo bun by OC Baking Co.’s Dean Kim. It’s modern comfort fare and quite succulent even before dipping into dark jus spiked with smoked paprika. Shepherd’s pie for two is a deep trough of savory beef and lamb, plus carrot, parsnip, and celery chunks topped with mashers under browned bread crumbs. The more we eat, the bigger it seems to get. This could easily feed three, maybe four. Pan-roasted Australian barramundi is skillfully prepared, the flavorful fish cooked through but still succulent, on a bed of cauliflower hash. A fresh herb-tomato relish brings a pitch-perfect note of tang.

Sweet endings are all made in-house. Go big with the heavenly “broken” banana cream pie studded with shards of sweet pastry crust, topped with brûléed fruit, and scribbled with caramel sauce. Only a child would insist—in this case Jocson’s 10-year-old daughter, Madeleine—that a cupcake demands a cup. So the red velvet cake is baked in a rotund coffee cup that arrives with a cumulus cloud of whipped cream cheese. For “just a taste” dessert, go straight to the fresh, crunchy minicannolis (choose one or five) filled with chocolate-tinged fresh ricotta.

The “red” in Red Table stands for “relax, eat, drink.” Cutesy yes, but it’s an unpretentious mission statement for a fledgling restaurant intent on converting customers into regulars. With fare this enjoyable, a table of any other color would be as inviting.

Off the Menu
Jocson offers a Trust Me tasting menu of many courses for groups of 10 or more; advance notice required.