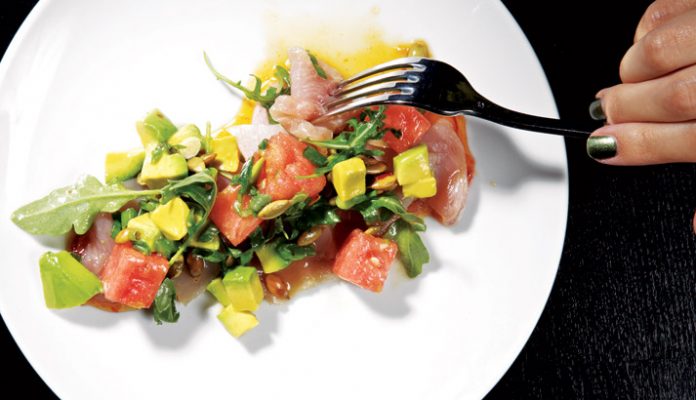 Last spring, when chef-owner Jason Quinn plotted his rookie restaurant in downtown Santa Ana, he noted that burgers and craft beers would be central to Playground’s fare. Today, he pours 75-plus swell brews, but not a single burger graces the quirky menu. The feisty Quinn simply assumes you’ll know it’s there, perhaps because of the nonstop parade of fat patties in glistening brioche emanating from the kitchen—a one-size-fits-all meal in a bun. No upgrades. No extras. No requesting how you’d like it cooked.

This is a place where the more you surrender to the wiles of your chef, the greater your pleasures. As the chatty website warns: “At Playground, you have to submit to our whim.” This is no shrine to conventional meals, nor the place to satisfy your craving for a particular dish.

What Quinn’s always-changing menu does tout are scores of intriguing meat and vegetable dishes listed in typewriter font: superconcise Maple Glazed Pork Chop on one hand, cheeky You’re Wrong About Anchovies on the other (it’s a Spanish white anchovy pan con tomate, better known as fresh tomato and anchovy smeared on bread). Some entries are flat-out brash: Buy the Kitchen Staff a Round of After-Service Beers.

Good thing the affable crew is patient and conversant.

Try lunch if you’re not up for sassy menu riddles. The carte is to the point, and the options are appealing. A golden grilled-cheese sandwich oozing Tallegio and cheddar is an impressive stout stack, no preamble required. It’s also prime time for the notorious burger: a three-day project that involves butchering, aging, grinding, forming, and grilling, and yields a delicious two-hander cooked perfectly medium-rare. Melted Tomme de Savoie cheese and simmered maple-bourbon onions add harmonic umami, without subduing the char-and-beef notes of the lusty near-half-pounder. Some knock the shredded iceberg lettuce, but with a heap so carnal, I find the criticism nitpicky. I’m willing to hand it to a chef who confidently serves a dish his way, especially when I have no regrets.

Come dinner, the crowd turns hipper, and the vibe more focused on culinary escapades. Quinn and his team regularly circulate through the proletariat-chic room, running dishes or dispensing details. The week’s dinner menu premieres on Tuesday and evolves as the week passes. It’s not unusual to see caveats—“we only have two” or “limited” on the menu by Friday. By the end of the week, a lovely rabbit mousse on toast is replaced by a spicy soft-shell crab Benedict that makes similar dishes seem humdrum. Tangy fermented tofu as rich as a fine blue cheese replaces wok-sizzled sugar snap peas slick with sambal and salty soy.

Inspired by what the season and offbeat sources have to offer, the kitchen riffs with anarchistic glee. Solid technique and grueling work may be the only tethers keeping this shop grounded. Meals are not presented by courses; dishes arrive in the order they’re ready, gastropub style. So pace yourself or your table will be overloaded with dishes you can’t enjoy before they cool, such as the congealed cheese-and-mushroom quesadilla we abandon after a bite.

Some diners don’t warm to Quinn’s feisty attitude. But he also can be an irresistible pied piper.

If you’re looking for proof, book a table for the incomparable Sunday Supper, the $40-per-person prix fixe meal with limited seating, no menu, and what seems like an endless parade of courses.

Our meal starts with a quick verbal survey of diners’ appetites and allergies, and Quinn’s suggestions based on the kitchen’s mood and inventory. Everything is served family-style.

First out, a suckling pig head with juicy cheek meat we pick through hungrily. Next comes a lacy tangle of baby greens, goat cheese, onion slivers, and glazed pecans, followed by a platter piled with quail lacquered in pomegranate sauce.

After one or two of the bantam birds, we’re delivered a share plate of soft scrambled eggs, shot through with rich jamón ibérico lardo (cured Spanish fatback).

A generous bowl of fresh, yellow sweet corn, off the cob and spiked with butter and Mexican cheese, arrives next. Then come spears of summer zucchini, slick with herbed olive oil. The two are sunny breaks before feasting on a massive and tender-pink pork chop glossy with toffee-hued maple syrup.

Is that a whole chicken headed our way? Indeed, and it’s deep-fried golden, with minimal breading to highlight the poultry’s old-timey, nonsupermarket savoriness. A thin dipping sauce, fiery and off-sweet, is the addictive partner. Course No. 10 (or is it 11?) is the only dud: underbaked cinnamon rolls that are doughy and raw inside. The weighty finale to this fabled feast—a syrupy, dense sticky-toffee pudding—make us yearn for a bright sorbet, which would have been a lighter, more graceful endnote. We aren’t the only party exiting with multiple bags of leftovers.

Sunday Suppers often sell out, despite the rigid pay-in-advance and cancellation policies. But popularity doesn’t equal staying power and nothing here remains the same for very long. That would be playing by the rules, something that just doesn’t happen at this playground.