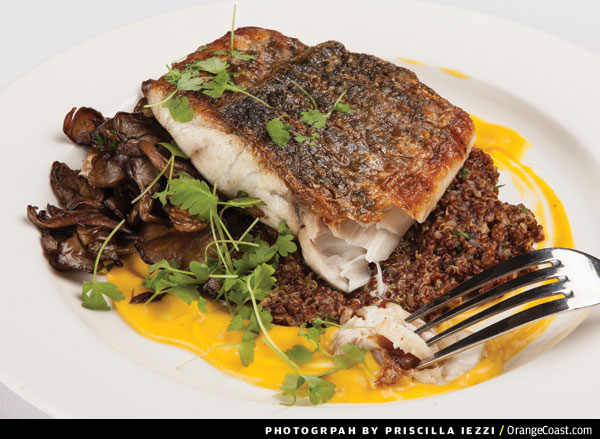 As I dig in to my latest meal at Santa Ana’s Little Sparrow, a loop of the ’60s E-chord surf tune won’t leave my head. A-well-a bird, bird, bird, the bird is the word. I chalk it up to dizzy relief. It’s been some time since a new restaurant has wowed me three times in a row. The bloody mary is superb, and I’ve had only one—I swear.

Sunday brunch is the latest cause for my delight. The cocktail, crafted with care, plays agreeably with the first-rate eggs Benedict. Flawless buttery hollandaise cascades over two expertly poached eggs stacked on tender prosciutto and house-made English muffins. That’s right, the just-griddled muffins don’t come from a supplier; they’re fresh and spongy and cut with ease.

The tri-tip pastrami, one of few lunch items on the brunch roster, is a champion sandwich, and ideal if you’re not into eggs or morning sweets. It’s a classic marriage of Swiss cheese and grilled rye bread, but the hefty slices of juicy house-cured pastrami set it apart. With its beefy flavor not masked by the salt cure, this pastrami has little in common with that at your corner deli.

Samaniego has serious chops and brings experience from boldface venues that include L.A.’s Comme Ça, Sona, and Charlie Trotter’s in Chicago. Most importantly, he’s keen to “fuse the local culture with classic European culinary traditions,” and says he’s inspired by Little Sparrow’s initial fan base of “worldly, seasoned diners.”

Overhearing nearby conversation is a cinch in this intimate 42-seat dining space. Much of the kitchen is visible from every table, and there is really nowhere to hide. Cordial, informed servers have all the details, and when they don’t, the answer is steps away. One night our server recommends the charcuterie plate, and our trio feeds like locusts on this generous platter that changes weekly. It’s gorgeous, homemade fare: a crock of duck rillettes, two pates (chunky and smooth), and headcheese. Grainy mustard and grilled toast accompany. This rich array outshines the popular roasted bone marrow that’s nicely executed, but essentially a one-note dish by comparison.

The large portion of crispy sweetbreads belies its starter classification, but the toasty brown morsels—sizzled with bacon and cipollini onions and served on a pea puree—make a delectable share plate for two or three. At summer’s end, the spot-on fresh corn risotto with an island of lightly dressed Dungeness crab salad makes a delicious case for returning next August.

The tightly edited menu has more appetizers than entrees, so pacing is in order; have too many tasty starters and the generally rich-yet-refined dishes can overwhelm. Dripping with gutsy flavors, the juicy, huge heritage pork chop gets even more dimension from a sofrito mixture of onions, garlic, and blood oranges. The sweet-sharp acidity enhances the plate’s side of lustrous black lentils, but expect the dish to change with the season. Ten ounces may sound small to big eaters, but the tender New York strip steak packs more flavor than most of its larger top loin competitors. Wilty grilled leeks and pieces of potato confit complement, but Samaniego’s textbook Romesco sauce elevates this dish to the all-star roster. Mellow poached garlic and anise-y fennel add depth to the wine-braised lamb ragu that tops ivory ribbons of fresh tagliatelle for a satisfying bowl of pasta.

Skuna Bay salmon and grilled free-range chicken also are on the menu, but don’t miss the fresh barramundi if you’re after something on the lighter side. Pan-seared to a turn, it’s served on a bed of crumbly red quinoa. This night, sauce piperade, a classic Basque simmer of pepper-tomato-garlic, provides luscious bass notes.

Pastry chef Nasera Munshi is another plus for Sparrow. Once co-workers at Comme Ça, Samaniego eagerly campaigned to have her on his kitchen team. She’s the artist behind the achingly flakey morning croissant and pain au chocolate. One night after dinner, minidesserts are compliments of the house: a sunny mango pot de crème and two over-large and painfully sugary peanut butter macarons. At brunch, a deep-dish croissant with a heart of pastry cream and a roof of sliced strawberries is sweet redemption.

Don’t overlook the semihidden bar behind the kitchen. There’s a nook entry off Third Street, if you don’t blink. The cozy, high-ceilinged space is the dusky salon counterpoint to the buoyant sunlit bistro side. Classic, well-made cocktails plus a few signature drinks populate the menu, with a notable paucity of vodkas and a bounty of gins. Also meritorious: no flat screens. Best of all, a separate bar menu of light bites that include spicy lamb meatballs, an outstanding grass-fed burger, and warm, unforgettable rosemary madeleines lightly dusted with powdered sugar.

Years from now, will this be known as O.C.’s bird era for dining, what with Early Bird, Crow Bar & Kitchen, and now Little Sparrow? We shall see. But so far, the littlest bird is flying the highest. How nice that it offers a new and refined place to roost in this dynamic neighborhood.