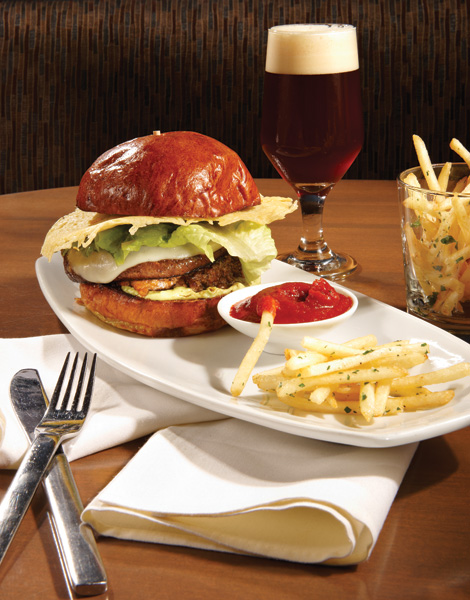 If you consider the sheer volume of chatter in the social media cosmos, Chapter One: The Modern Local, the enthusiastic gastropub in Santa Ana’s Artists Village, makes friends easily. Even if you don’t give a tweet about Facebook posts, a warm welcome awaits from a genial, informative bar crew. Or maybe a stroll-by greeting from one of the trio of partners. Jeff Hall, Jeff Jensen, and Tim O’Connor diligently scope the split-level space, targeting new and familiar faces for some passing repartee.

We start at the 18-seat bar. Cocktails, brews, and wines are a refreshingly unconventional lot, with nary a mainstream brand to be found. Bartenders eagerly suggest options and explain the finer points of outlier players such as mole bitters, quinoa-based Fair Vodka, and Kelt VSOP Cognac. Or, order the Moscow Mule, a sprightly signature cocktail of house-made ginger beer and Russian Standard vodka, served in a frosty copper mug. Yes, you can eat at the bar, but sitting in one of the dining room’s ample booths or at a table is far more comfy.

Executive chef Oge Dalken describes Chapter One’s cuisine as “American food gone global,” and it does ricochet among locales. Asia, Italy, France, even a nod to the American Southwest share billing with offbeat dishes best called extreme fusion—what else would you label smoked salmon jerked nachos or a Scotch egg encased in ground turkey, rolled in panko, and served alongside Asian mustard-mango sauce? Add tags such as “local,” “seasonal,” and “sustainable” and, well, the menu is a busy, ambitious bill of fare.

Nibbles, listed under “Preface” per the menu’s book motif, are a quirky set of appetizers. Fried shrimp with a sheath of crunchy coconut curls are sweetly luscious, but the finely shredded cabbage slaw is swamped in meek curry sauce with diced pineapple. Escargot perfume the air with garlicky thyme butter. They come without shells in a pot sprouting a tall crostini topped with goat cheese and prosciutto, a curious pairing. “Stuft” squid gets plenty of buzz, but it’s a letdown both times we try it. The calamari lacks flavor, and the piranha ribs with cucumber-tequila salsa sounds intriguing and campy in a Syfy Channel way, but they’d already run out of the fish on both my attempts. Smoked salmon nachos is a flavor carnival that layers jerk seasoning over flaked smoked salmon. Citrus-spiked sour cream dotted with orange tobiko (flyingfish roe) rounds off the bolder notes, but more won-ton crisps, please. Four aren’t enough to finish this otherwise share-worthy appetizer.

A respectable burger is a measure of any pub, so it’s a relief the Italian burger comes shining through—a flavor-charged beef patty ground from chuck, short rib, and brisket tucked into a bronzy brioche bun smeared with basil aioli and stacked with a roasted Portobello and a Parmesan crisp for maximum savory impact. Salmon BLT with sweet corn relish handily trounces the sadly bland lamb burger. Both sandwiches come with overseasoned shoestring duck-fat fries that need more crispy crunch. Plus, the presentation needs rethinking: Limp fries in a squat tumbler aren’t enticing, and even less so once the glass becomes smeared with grease and garlic powder; a paper liner would be a good start.

Marinated skirt steak with chimichurri sauce and bland yucca fries is forgettable in a neighborhood rife with authentic versions. Blue cheese and candied pine-nut butter are delicious foils for a mighty porterhouse, but the first steak is overcooked and the replacement is medium rare only in the thickest section, hardly a satisfying way to drop $35. Typically a go-to cut for beefy flavor, the culotte is given over-the-top treatment, wrapped in bacon with a dusting of ground coffee and chocolate. Dijon mashed potatoes supply welcome simplicity.

Carb lovers should skip the unremarkable Thai noodles and head straight for the gooey, bacon-rich mac ’n’ cheese, a floppy, large elbow pasta oozing with a mix of fontina and sharp white cheddar under a crust of panko and caramelized onions.

Brunch on Sinatra Sundays is surprisingly solid, and growing crowds suggest the word is out. The soundtrack is supposedly inspired by Ol’ Blue Eyes, but it might as well be “Sesame Street” tunes once things turn loud and lively. Along with stalwarts such as the burger and ahi salad, the condensed menu offers sweet and savory choices such as étouffée Benedict with small scallops sizzled in a dark roux, served with poached egg, hollandaise, and black beans in a gaping flour tortilla shell.

Chapter One, housed in a former bookstore, has all the makings of a classic dining story: a creative menu, storied history, alert management, and earnest hospitality. But the unfocused food begs for vigorous editing. Then again, a first draft is made for polishing, no?