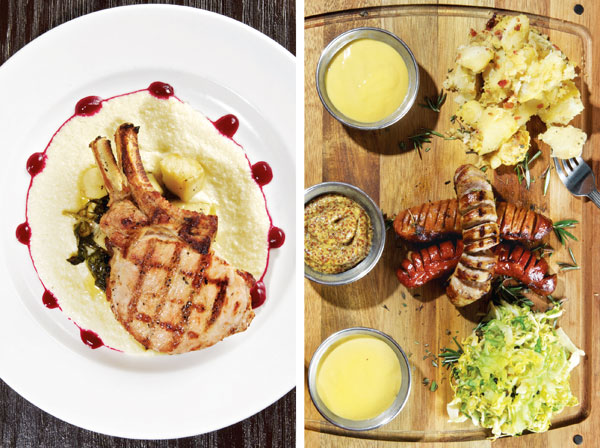 Yelp reviews are reliably capricious, but I do read my fair share and know how to quickly sift the shills from the sincere. It’s a cinch, really. But Lake Forest’s Brü Grill & Market had me stumped. For months, reactions whipsawed between disdain and delight.

Now, after nearly a year, it’s time to check out this ambitious indie that dares to elbow in on the turf of nearby suburban darlings such as Lucille’s Smokehouse Bar-B-Que and Pei Wei Asian Diner. It’s a behemoth property—350 seats—and even after a retool it still bears a vague resemblance to its former life as a Carino’s, minus the red-and-white checked tablecloths. The massive bar with multiple communal tables is a shrine for worshippers of craft beers, pulled from 22 taps or ordered from a list of 118 bottles. Choose an interesting cocktail if brews don’t appeal; the crew here mixes a nifty one, be it classic or audacious.

All that fermentation demands a bodacious burger and the kitchen delivers big on that mandate. Freshly ground porterhouse, seared to medium rare, is the brawny base for umami-rich aged cheddar cheese and onions caramelized in ale. It’s a handful of juicy, bold ingredients that magically don’t disintegrate the artisan bun buttered with smoked pepper aioli. Also enticing is the trio of grilled ale-braised sausages: one brat, one Italian, and one feisty andouille, all crafted by Europa, a local artisan supplier of specialty links. Lively house-made sauerkraut, chunky potato salad, and three  mustard dips make the combo platter a beer buff’s dream, though it’s yummy enough to flatter Diet Coke if booze isn’t your thing. You’ll leave a winner if you order nothing else but the sausage plate or the house burger. They easily outclass other fairly worthy bar food choices that include truly hot chicken wings, customized to your capsaicin tolerance, and an iron skillet brimming with Prince Edward Island mussels simmered in Cismontane ale brewed in Rancho Santa Margarita.

Tangy apples and a golden raisin gastrique give an original twist to the Bloomsdale spinach salad that’s hefty enough to handle a drizzle of blue cheese vinaigrette. It’s large enough to share, and too much food for one, paired with an entree. A virtuous diner would find it perfect for lunch. It’s a good match with fresh, oven-warm mini-
torpedoes of soft pretzel bread, sliced at a steep angle fit for dipping. Too bad the companion white cheese sauce is drippy and wan. Stick to the whole-grain mustard; its flavor better complements the malty bread.

The market portion of this venue is clearly a secondary concern. Many wines from Brü’s list, cheeses from their charcuterie offerings, and house-baked breads used in menu items make up most of the inventory. The uninspiring wine list severely limits options for oenophiles, but prices are fair and corkage is only $10. Still, it’s better to BYO good stuff and pay the fee. As the sweet but beleaguered waitress wages war with our bottle’s cork, it’s clear her real enemy is a flimsy, second-rate corkscrew. She borrows a legit cork-puller from the bar crew, then scurries to return it.

Beyond booze, bar food, and starters, success is intermittent. Brü breaks down and dry ages its beef, so I’m keen to try the grass-fed New York strip. First bites are a struggle, and a dull steak knife doesn’t help. The meat cools as we flag down the server (who readily admits this is her first solo night) for a replacement. A sharper knife isn’t the solution after all, not for this sinewy cut that lacks much chewable flesh. Red snapper, the night’s fresh seafood special, is pan-roasted with skin on, but a light cream sauce with slivers of fresh vegetables adds nothing. It has no trace of the sambal touted by the server. Just before the meal plummets into the abyss, the handsome, long-bone pork chop arrives. It’s near-perfect from judicious brining, and precise cooking finds the sweet spot between tender and dense, slicing easily into flavorful mouthfuls of porcine pleasure.

Sweet relief continues with a notable charcuterie platter that impresses despite a number of unavailable items. Still, the cheeses are distinctive and not overchilled, the meats freshly sliced superthin, and the condiments both sweet and savory, are properly striking. The delectable array makes me wish the steak and snapper never happened.

Pastry chef Ana Torres’ creations also warrant strong praise. Bread pudding with rum raisin sauce is moist and lighter than most, and her Brü Cake—flourless chocolate baked in a Mason jar—scores extra points with its nimbus of whisky-tweaked whipped cream. We’re lucky to have this Laguna Culinary Arts grad return after her stint at L.A.’s Water Grill.

If you adore beer or cocktails, you’re a step ahead at Brü. But every diner is at the mercy of a hit-or-miss kitchen. Gems await discovery, but it helps to be lucky or patient. Mine the menu well and you’re rewarded with enticing dishes that will lure you back for favorites. Fair warning though, Deschambault’s sudden departure at press time doesn’t suggest a less erratic kitchen. At least the menu’s winners remain, notwithstanding seasonal updates.

FYI
The umlaut in Brü is a nod to beer’s Germanic heritage.

This article originally appeared in the March 2013 issue.