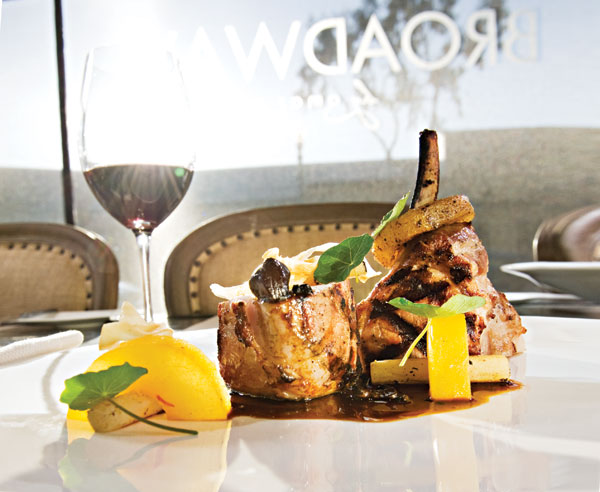 When I first heard about Broadway by Amar Santana, my initial thought was that it takes some titanium, er, moxie to name a restaurant after yourself and a New York landmark. But my prickly reaction seems petty and strident in these days of unbridled self-branding.

After all, plenty of other locals already have paved the eponymous way, including Fleming’s, Brasserie Pascal, and Charlie Palmer.

But what really tamed my cantankerous ’tude were the meals I had at the new restaurant, which I’ll call Broadway. Open since September in the former downtown Laguna Beach digs of legendary Five Feet, the still-compact space is supremely reimagined, and thrums with life. Granted, chef Amar Santana and GM Ahmed Labbate bring a fan base built on their rosy run at Charlie Palmer. Add to that a corps of local foodies and you often have a packed house served by a bustling open kitchen.

Santana dubs Broadway’s fare “cuisine of the Americas,” but given the daily menu updates—make that “nightly” since this is a dinner-only destination—it’s a very inclusive, elastic label that gives him room to roam. In light of the looming ban on foie gras, I happily start my meal with an order. Santana’s foie gras is a siren song that delights as much as any he finessed at Charlie Palmer. These lush segments are seared beautifully, melting into French toast that’s redolent of pumpkin pie spices.

Another night two starters miss the mark. Ahi tartare in a wide dark bowl looks striking but tastes muddled, the smear of coconut puree fighting pickled pineapple in an oil-liquid war that subsumes the raw fish and faint curry vinaigrette. Dates rolled in bacon are achingly sweet and overly salty, the blue cheese filling too skimpy to provide balance.

But all is forgiven when a hearty helping of flash-fried Brussels sprouts arrives, bright-green half orbs with singed edges, mixed with sweet-salty nuggets of dense Chinese sausage, all dressed with a sweet-sour drizzle that gives it an exuberant flavor hug. It’s the tastiest treatment of sprouts I’ve tried in many months.

Santana disciples are sure to thrill to the intense, savory gems that diners associate with his cooking. Roasted bone marrow, Kobe sliders, braised lamb belly—they appear often with tweaks that vary enough to ward off ennui. Since Broadway is still refining its stance, conspicuous adjustments may continue going forward. For example, the menu’s early organization into small plates, appetizers, and mains has been replaced by choices dubbed first course and main course. Chicken liver mousse, brined onions, and grilled sourdough planks, once a small plate, now is a pâté under first course, upgraded—for a slight price increase—with truffle flecks. Both incarnations easily satisfy the craving for a robust, wanton nosh. Lush veal sweetbreads are a standout—barely crisped in a coating of ground mushrooms, swirled in truffle jus and complemented by braised parsnip and squash and a clutch of wilted greens. It’s a dish of subtle harmonies, free of sharp notes or intense flourishes.

Berkshire pork chop conjures the spirit of pig-loving Charlie Palmer—it’s one of the better entrées, expertly cooked and teamed with fall-apart cheek meat, salsify, and black garlic jus. Pear with saffron glaze adds a touch of sweet opulence. Filet is, well, a tender filet of beef, but smoked marrow bordelaise sauce propels it up a notch or two. Herb-basted chicken breast is moist and mild, but the tasty, too-tiny garnish of crispy skin is a savory, naughty tease that distracts me from the plate’s flavorful braised celery root and Swiss chard.

Scottish salmon roasted with fresh thyme and sauced with citrus butter gets assist from a smattering of roe and suggestion of dill, but only its price of $29 puts it ahead of two winning first courses: Japanese hamachi (amberjack), and braised octopus with romesco sauce. A silky, jade-hued avocado sorbet suits the buttery slices of raw amberjack superbly, and citrus-miso dressing delivers complex zing. A fleeting sizzle on a flat iron gives the supple octopus added aroma and a light veil of caramelization.

Desserts from a short list deliver some surprises. A giant bowl of panna cotta infused with bourbon and vanilla bean is almost too much for two. Seasonal fruit salad is a luscious sleeper; barely macerated berries and mint evolve into a chilled soup as sweet, perfume-y lychee sorbet and ginger granita melt into the pool. Caramel-chocolate ganache is plenty rich, but really piles it on with spiced whipped cream and chipotle-chocolate ice cream. And to top that, its outsize plate comes with a smoldering lighted cinnamon stick we swiftly extinguish, lest our scowling neighbors six inches to the right and left call for our exile.

Bartenders play their own tricks with aroma when mixing a signature Sergio Leone. The process of “capturing” the mesquite smoke’s flavor is pretty showy stuff. Other handcrafted cocktails and a discerning inventory of spirits make for chic sipping at the bar. It seats 14 and feels less compressed than seating at the extended banquette.

Meshing the worlds of kinetic Manhattan with village Laguna hardly sounds like a harmonious design aesthetic, but, expressed in contrasting surfaces of plush and rough, backed by silvery grayscale photos of New York at night, it works handsomely. The gracious Labbate— and the servers, some alums of Charlie Palmer—navigate the often-cramped quarters with charm and patience. Meanwhile, the ever-merry Santana commands his rookie kitchen with confidence that belies his 29 years, and wows an audience that expects a smash hit. Why shouldn’t his name be on the marquee?

Best Tables
Six spots at the chef’s counter are the equivalent of floor seats at a Lakers game; mid-room tables offer modest relief from the close confines.

FYI
Snagging a nearby parking spot can be tricky but there’s a small paid lot next door, more paid valet spots a few doors north, and plenty of metered street parking.

This article originally appeared in the March 2012 issue.