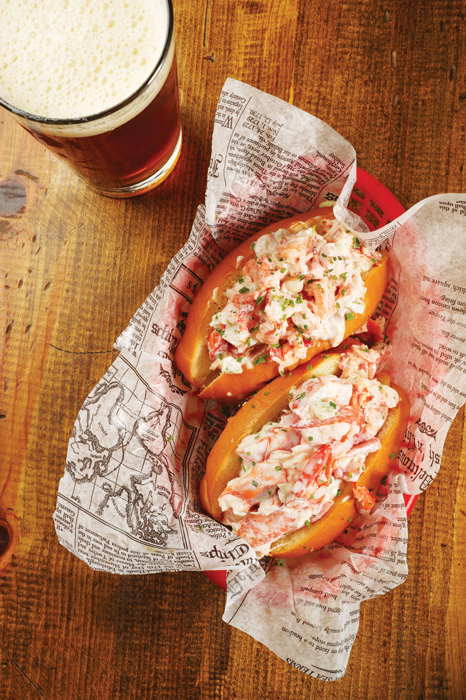 My tolerance for pretentiousness is grumpily low, so I’ve liked this restaurant’s name ever since it opened about a year ago. Bold. Direct. Specific.

Does this Laguna Beach rookie live up to its moniker? I decide to wait until the tourist crowds dwindle before finding out. The place has been mobbed from the get-go and I think newbies deserve settling-in time before their close-up on these pages. Plus, trawling for an elusive summer parking place is no way to start a meal.

The beach air is chilly, the streets are sedate, and parking is a cinch on my initial visits to what quickly becomes known as “The House” because repeating the whole name feels silly. Snagging reservations is easy, and a wise move since the second-floor space is always packed tighter than Crystal Cove beach on a hot summer day. Our table on the enclosed wrap-around patio seems blessedly quiet after trekking through the boisterous bar and lively main room.

We pull menus from a stack at the table—this is a deliberately unfussy operation—and get our first look at a tsunami of 120-plus dishes and more than 50 beers. OK, 49 beers, because the one we order, Samuel Smith Nut Brown Ale, is out of stock. Low prices astound: The chilled seafood platter for two is $24 and most items are less than $15. Craig Connole is the chef-partner behind the rollicking seafood house’s sweeping menu, and he’s often present in the busy kitchen. Which is quite a feat when you consider he also oversees the dining venues at two boutique hotels—La Casa del Camino in Laguna Beach and the Hotel Ménage in Anaheim.

A sampler trio of Hawaiian style poke (diced raw fish with seasonings) sustains us as we assemble a bigger order. Both ahi and hamachi pokes glisten with fresh onion, slivers of emerald seaweed, and soy amped with sriracha sauce. Shoveled onto amber won ton chips fried to an airy crunch, the mixtures are ultrafresh and highlight the differences between the fishes. Ruby ahi is silky and bright while the pink-ivory hamachi is creamy-rich. Avocado-tofu poke adds the crunch of cucumber for a mild vegan-friendly option, though its flavor is missing something—namely raw fresh fish.

Round 2 features shellfish in various permutations. Shrimp and crab Louie is a DIY salad—a huge bowl of untossed ingredients heaped with gangly uncracked king crab legs. Sweet and luscious, the crabmeat takes forever to extract with pathetic plastic utensils. A pair of delicious New England-style lobster rolls cheats a bit by adding some shrimp to the mix, but it’s a careful blend of sweet lobster meat, fresh celery, and just enough mayo to bind the ingredients so they stay put in butter-toasted hot dog buns. I dearly want to devour the one I give away, but I need room for the swell blue crab cakes. Sizzled in garlic butter, their rust-brown crust yields to fat morsels of fresh crab spiked with Old Bay seasoning and precious little filler. Adding a cup of creamy chowder and two sides—savory grilled potato chunks and vegetables—makes this or any catch of the day a full-size entrée.

In fact, the huge menu allows for lots of mixing and matching. Several daily fresh catches include choices for starches and veggies and a dozen house-made sauces, from ordinary tartar to novel guava butter or lime caper vinaigrette. Build a combo by adding steak, crab legs, lobster, and more for an additional $7 to $12. The menu says the majority of items are sustainably farmed or wild-caught, which is reassuring though near-impossible to know for certain, so we have to accept it on faith.

Before Round 3 appears, the quiet patio is louder than a runway at John Wayne. We shout at one another to be heard over the general roar and squeal of nearby revelers. We bellow to our cheerful waitress, whose accent leaves us unsure whether we’re connecting. Sticking with the seafood, we pass on the grilled rib-eye sandwich in favor of a tasty ahi burger, cooked rare, on a brioche bun. On another visit, the sirloin burger with cheddar and bacon is unexpectedly tip-top. A tangle of slender fries proves irresistible, blazing hot with a salty crunch.

Too bad the beer roster is lopsided on mass-market brands in bottles. Only four are offered on tap—and one of those is Bud Light. More adventurous “big” bottles (17 to 22 ounces) include St. Peter’s Organic Ale and Smith Oatmeal Stout. They arrive icy cold as touted, but where are the local brews? Wines are a mostly middling lot, and overpriced. Stick with cocktails or beer; the wait staff has a far better grasp of those.

Dessert options are few and, after these mighty portions, I suspect they’re often ignored. If you must, go for the worthy root beer float and stay away from the chocolate macadamia crunch bars. They have the tensile strength of iron, are impossible to cut, and are paired with a cloying coconut sauce sweeter than Glinda the Good Witch.

Sampling the entire menu would require taking up residency here. This could explain the crowds. There are Baja-style tacos and ceviche, blackened catfish with lobster-Creole sauce, oysters Rockefeller, spicy mussels marinara, a spicy sausage sandwich, and shrimp scampi pasta—literally something for everyone. Even more impressive, it’s all fresh, superaffordable, and generally tasty. No wonder the joint is reeling in locals.

But about that name. It would be even more fitting changed to: Loud Shack of Cheap Fish & Truly Ice Cold Beer.

BEST TABLE
Any patio table for a view. For game broadcasts, a high table near the bar.

TICK-TOCK HAPPY HOUR
2:30 to 6:30 p.m. Monday through Friday. Several chilled seafood dishes and hot appetizers start at $2.30 and increase in price corresponding to the time until they reach $5.30; $5 well drinks and $1 off beers throughout.

This article originally appeared in the March 2011 issue.