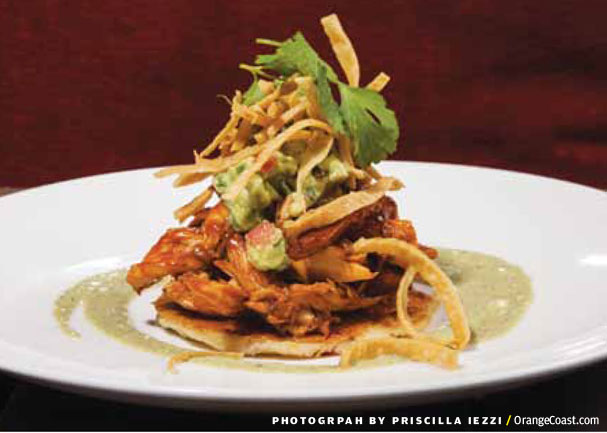 She sits quietly at a table for two at the front window, only a glass of water before her. Not even a menu. After 20 minutes, my tablemate spots a solo male, looking bemused, at a table in the back of the 220-seat space. Eventually, the two singles find each other and share a meal.

Despite the awkward meet-up, the choice of 6-month-old Lark Creek for their blind date is shrewd. The handsome venue is populated, of-the-moment, and easy to access in Newport Beach’s fabu-lush Fashion Island. Not too flashy and not overly romantic, it navigates that tricky moat between risk and certainty.

Urbane, earth-toned decor telegraphs upscale comfort, but the menu of New American fare is where things get really polite. Most of the options have a familiar ring—fish tacos, wood-oven steaks, butterscotch pudding—so expect few surprises. This is familiar territory for the 14-unit Lark Creek Group, Northern California operators behind long-celebrated venues that include The Lark Creek Inn, One Market, and Yankee Pier. This is its first Southern California outpost. In the ’90s, the farm-fresh cuisine at star chef Bradley Ogden’s seminal Larkspur restaurant created enough buzz to build an empire. Today his emeritus rank carries the title of co-founder and culinary advisor. Back at the corporate ranch, Adrian Hoffman is vice president and culinary director.

Which brings us to chef-partner John Ledbetter, top toque in this new Newport Beach kitchen after stints up north at Lark Creek Steak and Oakland’s beloved indie, Bocanova. Now that the venue is running full-throttle, he’s managing the cuisine for five menus: lunch, happy hour, dinner, dessert, and brunch. His crew juggles a slew of dishes, though it must help that many are proven performers at other branches. His role demands execution more than innovation, and the cooking is terrifically consistent and never sloppy.

Salads are chilled and crispy fresh, dressed with a light hand. Thin slices of celery and pear, with a cider vinaigrette, make a refreshing, pre-entree crunch-fest. Meat-free chopped salad with gem lettuce and chard gets a little heft from beets, potatoes, and dill-spiked buttermilk dressing. Shrimp ceviche does nothing new, but everything right—the white shrimp are sweet and tender, the avocado is ripe, the lime marinade tastes utterly fresh. Lark Creek clearly touts the “farm-fresh” designation, but now that foodies line up for meals on the farm or for trips with local chefs to farmers markets, the label doesn’t carry the thrill it once did. That’s not a slam, but a welcome evolution.

Lark Creek’s multiple menus brim with dishes we see often these days. From mushroom risotto, to day boat scallops over cauliflower puree, to roasted Mary’s chicken breast with kale and quinoa, they don’t rock the boat. But some days I want my boat rocked. I manage to flush out some bolder fare. For starters, the chickpea fries with gutsy harissa aioli are simple genius, so crispy they taste fried, but they’re baked. Bravo. Tasty morsels of barbecue chicken atop an oval of masa—the menu calls it a tamale pancake—is a winner with avocado salsa, and tortilla ribbons for crunch. At brunch, the dish is slightly modified and tastes even better, the masa crowned with pork confit, poached egg, and guajillo sauce for a meal that seems downright daring next to a mushroom omelet.

Diners who dare to go rogue, leaving cider-brined pork chop and fresh steelhead salmon behind, should check out the pasta. Right now it features spaghetti and roasted half lobster with Calabrese chiles. Gone is early fall’s Thai snapper bowl with egg noodles in dashi broth and bok choy. But it’s hard to miss a dish that’s high-priced street food minus the rusticity.

Desserts sound ordinary and taste that way, too. Even the clever sampler format can’t save them: Instead of one OK fruit crisp with ice cream, diners can get three forgettable minidesserts. This place needs a pastry chef, on site, pronto. Fine cocktails and discerning wines do add merit and interest, though. Prices are high, but the northern wine country connections are obvious with labels such as Failla, Etude, and Ridge. Wines on tap are an unexpected note of trendiness—sip some Hess chardonnay or Qupe syrah by the glass or carafe. And weekday happy hour is a surprising value.

Lark Creek’s service is top-notch. This team is smooth at keeping customers happy. GM Chad Sisco (ex-Pinot Provence) knows how to woo this crowd, and his front-of-the-house crew operates with panache. Fashion Islanders can afford B food at A prices, especially when VIP treatment is included. Newport Beach diners are sure to zero in on Lark Creek as inevitably as blind dates with iPhones find each other.

FYI
Corkage is $15 per bottle, but waived if you also purchase a bottle.