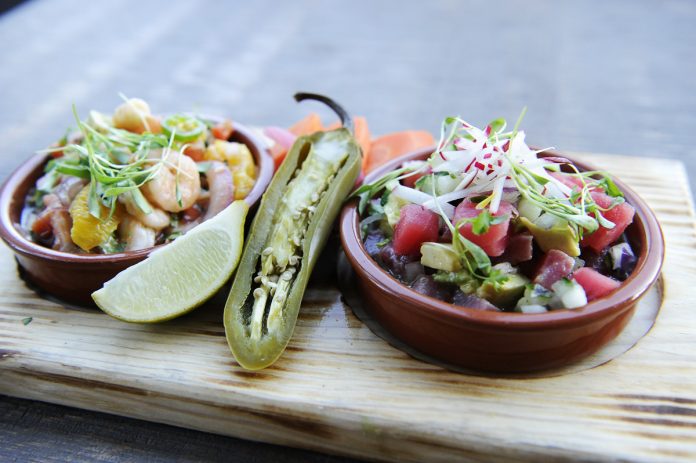 Is ignorance really bliss? Not in the restaurant business, a rough-and-tumble arena where profits are slim, regulations are hefty, and customers are thin-skinned. For every non-chain success story, there’s a beach littered with the drained 401k accounts of starry-eyed neophytes who imagined their poke shop would outshine all others.

Don Myers and Peter Serantoni, founders of Cha Cha’s Latin Kitchen, are not those dreamers. Between the two, they’ve logged more than 30 stints as managers, consultants, or owners. Once Cha Cha’s proved itself in Brea, they waited nine years for the right site to reveal itself, opening in the Irvine Marketplace in June 2017. Star designer Thomas Schoos’ revamp leaves no trace of the former IHOP. Fusing dining room and patio with a pass-through bar, the 200-seat space feels fresh, contemporary, and suited for socializing. For prime seating, choose the patio bar or tables near the flickering fire trough. The savvy layout is a marked upgrade from the original Cha Cha’s, and this menu heralds updates for both locations.

With a legit list of 23 tequilas and mescals of varying ages, you should have a margarita if you’re a fan. The deservedly adored watermelon version won’t return until summer, so try the Cha Cha’s version, bright with just-squeezed red grapefruit and a flowery dose of elderflower liqueur. You can also sample the day’s tasting of tequila flights or ditch the booze altogether for a house-made fruit refresher, made with mango, hibiscus, or lemon.

It’s hard to go wrong ordering appetizers as they’re some of the best dishes in Cha Cha’s repertoire. For a robust start, order the queso fundido, a gooey, hyper-savory cheese dip hiding nubs of roasted potatoes and poblano peppers. I usually add chorizo—Portobello mushrooms are the other upgrade. I prefer sturdy chips and these are feather light, so I pay the $3 upcharge for a warm stack of house-made flour or corn tortillas for scooping up the melted cheeses.

Go lighter with the aguachile, a generous portion of squeaky fresh raw ahi jazzed with cucumber, red onion, and serrano chile macerated in citrus juice. Skip the basic guacamole and reward yourself with two newer menu items: hearty wild mushroom sopes and terrific empanadas plump with picadillo, a ground beef filling seasoned with garlic and currants. Both benefit from being hand-formed fresh masa that yields rustic texture and distinct corn flavor. Salads are serviceable, if routine, so go for a non-leafy kind, specifically the juicy calabacitas with sweet white corn.

Hefty tacos are offered in lots of three for $14 or six for $25—half-off on Taco Tuesday. Steak mojo sauced with habanero salsa, and carnitas with chopped pineapple and chipotle are reliably satisfying, but the wild mushroom taco is the surprise champion, with sweet corn, roasted mild peppers, and salty crumbles of cotija cheese. As for the fresh fish version, the night’s mahi mahi suffers from over-salting. Tacos include chewy-creamy black beans and fluffy salsa rice. Alas, the platters aren’t hot enough by the time they make their way to the patio, and once there, they cool down further.

Fresh seafood caldo, a Cha Cha’s classic, won’t leave you cold. Aromatic steam twists upward from an earthenware cazuela teeming with fin fish, shell-on shrimp, clams, and calamari simmered in saffron tomato broth. Dig down to twirl a tangle of toasted angel hair pasta that adds nutty depth as it softens. This remains one of the menu’s best dishes. Short-rib enchiladas are a strong entry. Soft from slow braising, the guajillo-infused beef packs intense flavors and somehow tastes better in this flat, stacked enchilada than it does in the taco iteration. Tender forkfuls get welcome zest and crunch from goat cheese and slivers of peppery fresh radish.

Flan lovers, this one includes a bit of cream cheese, giving it a richer edge. Coin-size sugar cookies flecked with orange zest complete the charm offensive.

Servers are knowledgeable and engaging, especially when not stretched during peak traffic times such as a bustling Taco Tuesday. Coming is a weekly tapas night. At 4 on Thursdays, bites will start at $4 and include grilled octopus, ahi aguachile, shrimp ceviche, quesadillas, and empanadas. Also debuting, a house-made rose’ sangria.

Cha Cha’s has served a low-key Sunday brunch since the Brea mothership opened. It’s $24 for three courses—add $10 for bottomless mimosas—and an opportunity to order the pozole verde, a chicken-based stew of tomatillo-chile broth and hominy, and chilaquiles, chicken hash, and huevos rancheros.

Nine years seems a long gap between siblings, but not to pros whose goal is to thrive, not merely survive.