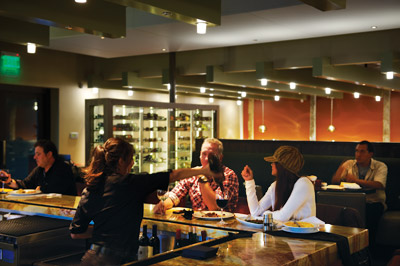 As a native of inland North County, I long ago accepted the unfortunate reality of the region’s arid dining landscape. It’s not a barren gulch, but it does lack the bountiful options of its fertile coastal kin.

So while the Newport Coast set bemoaned the closure of Sage on the Coast last spring, informed hinterlanders knew chef-partner Rich Mead was taking his act to Anaheim Hills, where the locals were eager for someplace new—and positively famished for somewhere enticing and satisfying. No wonder Canyon was greeted with open arms from its first days last May, despite some wobbly moments, including my inaugural visit, which lasted all of 15 minutes. That’s my limit for waiting at a bar, ungreeted.

Slacker barkeeps and flustered hostesses couldn’t deter the hungry masses, and now Canyon is fast outgrowing its gawky rookie phase. Subsequent visits in recent months show more poise by the staff and better teamwork between servers, bar, and kitchen. The young restaurant now bears a closer resemblance to Mead’s finely tuned flagship, Sage, in Newport Beach. The contemporary American menu shows a kinship, too—items such as the Asian short ribs are direct lifts from Sage, though dishes such as roasted beet salad or tempura green beans are distinct to Canyon.

This is a neighborhood-focused watering hole in Santa Ana Canyon Plaza, but with modern touches that feel fresh in this zone. The restaurant’s desert hues and textures echo the shopping center’s new tumbleweed-chic landscaping.

Roomy and uncluttered, the space has two settings: a sun-filled bank of booths, and a quiet, cozier alcove, the two bisected by a large, sleek bar. Behind the restaurant, a thriving kitchen garden produces herbs and greens that Mead tucks into salads and cocktails.

Locals are becoming loyalists. I overhear girlfriends ordering glasses of “that syrah we had yesterday.” A gray-haired father-in-law type makes menu recommendations to a young couple sipping martinis. A friend whose visits outnumber my own has long ago vetted the entrées and admits he’s partial to the lamb rack. It’s clearly not a room of wide-eyed first-timers.

Seasonal ingredients at their peak underscore a menu thick with familiar fare such as ahi tartare, pizza, and roasted chicken. Stressing seasonality demands constant tweaking, so the lineup changes slightly each day. Fresh figs on a pizza in August might be mushrooms or romanesco come January. Fried-green-tomato salad eventually makes way for Granny Smith apples, mixed greens, and candied pecans. Still, the choices won’t push diners too far from their comfort zone.

The succinct menu—grouped by small plates, green plates (salads), dinner plates, and desserts—is as uncluttered as the décor. Descriptions aren’t elaborate, so you may have to press for details from the chipper servers who are increasingly conversant about each dish. I didn’t question the ahi tuna tartare and was surprised by the generous portion that could serve as an appetizer for three. Grilled Asian ribs also are good for appetizer sharing. The chewy, caramelized curls of beef minus any bones—another surprise—is teamed with crunchy slaw and a sweet-hot Thai sauce for dipping.

The “green plates” are a tempting bunch. Ace salads include a commendable Caesar with sourdough croutons and lacey Parmesan crisps, and a hearty spinach mix with grilled red onions, tangy goat cheese, a top layer of grilled prosciutto, and a restrained balsamic vinaigrette. I’m still thinking about the salad of thickly sliced ruby and gold roasted beets with nubs of snowy goat cheese and crunchy toasted walnuts peeking out of fresh arugula. The classic ingredients are mindfully proportioned and linked by a lively Dijon dressing. Brittle cracker bread made with rosemary and sea salt accompanies the salads and many other dishes.

Any local hang is only as good as its burger, and Canyon’s gets high marks. Sturdy and straightforward, the hefty patty of ground chuck comes dressed with pancetta, melted cheddar, and the works on an egg bun from San Diego’s Sadie Rose Baking Co., which also makes the bread basket’s focaccia. One time the burger fell to pieces after a few bites, another time it held together neatly. Messy or tidy, it’s a lusty feast abetted by piping-hot fries and that bright Asian slaw.

Barbecued pork ribs, slathered with a sharp vinegar sauce, are almost upstaged by a trio of sides: three-cheese macaroni, grilled fresh corn off the cob, and earthy Swiss chard. Expertly cooked chili-crusted lamb rack with jus is tender as can be, and again, the sides are quite memorable. A grilled chopped salad of corn, green beans, and red bell peppers supplies color and crunch while baked goat cheese and potatoes, layered lasagna-style, bring the creamy richness. Overstuffed with garlicky spinach, sharp cheese, and filet mignon slices, the chiles rellenos get points for originality, but the brawnier beef dishes are the flat-iron steak with béarnaise and grilled asparagus, or the filet mignon with portobello mushrooms, port sauce, and twice-baked potato.

Eating light is important to this crowd, and Canyon embraces the trend by offering many entrees in full and half portions. Pastry chef Jasana Singer also enables diet-watching sweet-fiends with her minidesserts at miniprices. Her take on s’mores balances brûléed house-made vanilla-bean marshmallow atop chocolate semifreddo (a near-frozen custard), on a graham crust—so terrific you’ll curse the word “mini.”

Canyon is defining its terrain with each passing month, blazing trails to reach an underserved territory. The list of small and shareable plates gets longer, a bar menu appears, happy hour emerges, tasting menus surface, brunch service commences—this is a work in rapid progress. Suddenly, there’s new life in these dining badlands.

Best Tables
Banquette by the bar for people-watching; raised booths on the north wall for quiet conversation.

Real Deals
Weekly multicourse tasting menu-$15 for lunch, $32 for dinner. Sign up on the restaurant’s website to get weekly previews.

This article originally appeared in the December 2010 issue of Orange Coast magazine.