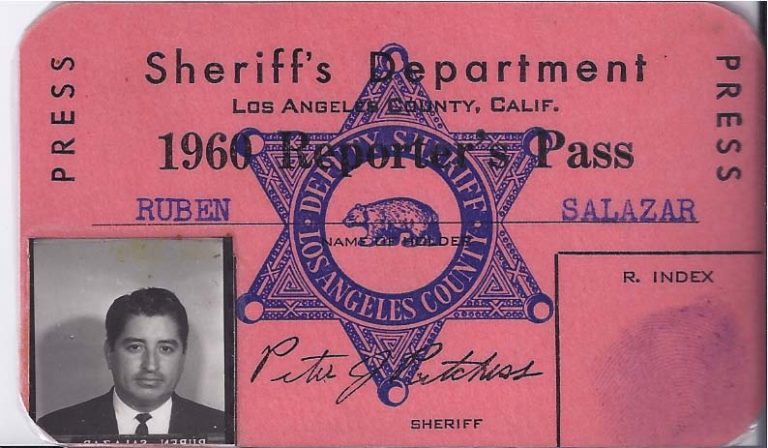 Santa Ana resident and Los Angeles Times columnist Ruben Salazar was one of this country’s most prominent journalists. He broke new ground in his coverage of Latinos and the Chicano movement. A new PBS documentary, “Ruben Salazar: Man in the Middle,” airs nationally on April 29, and sheds light on his life and his controversial death at the National Chicano Moratorium on Aug. 29, 1970. Here are some additional sources about this important reporter and writer.

Salazar’s archive of personal and professional documents was donated by the Salazar family to the USC Annenberg School for Communication and Journalism and is kept in the USC Libraries, Special Collections. An online component can be accessed here:
rubensalazarproject.com

Read some of Salazar’s journalism in:
“Ruben Salazar: Border Correspondent, Selected Writings, 1955-1970” (University of California Press, 1995)
In a review by Richard Griswold del Castillo, professor of Mexican-American studies at San Diego State University, and co-author of “César Chávez: A Triumph of Spirit” (1995): “[Salazar’s] prose was not strident or exaggerated . . . Indeed, the major motifs of Salazar’s writing are honesty, integrity and a refusal to idealize or cover up the truth.”

Lalo Guerrero’s wrote a corrido (a narrative song) about Salazar, one of many popular culture tributes that celebrated Salazar as a folk hero. Listen to it here: