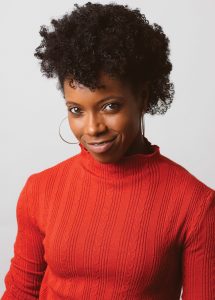 Who is Vi Moradi?

She’s a spy working for General Organa (formerly known as Princess Leia) and the Resistance. She lives on Batuu and encourages locals (and guests) to join her in the fight against Kylo Ren and the First Order. She was first introduced by Delilah S. Dawson in her 2017 book “Phasma,” and she is also in Dawson’s new book “Galaxy’s Edge: Black Spire.”

Tell us about your acting background.

I’ve performed off-Broadway and moved to California eight years ago. I appeared in a few shows such as “New Girl” and then got into stunt work, since I had a background in martial arts. I’ve also appeared in “This Is Us” and body-doubled for Kerry Washington and Angela Bassett.

Will Vi appear in any upcoming “Star Wars” films?

I don’t know, but I have every hope that she will. As much as I love the notion of having people interact with her in the parks and read the novels, I think having her in the films will allow more people to connect with her.

How have fans reacted to Vi?

It’s been fascinating to see people’s posts on social media about how she’s made their day or drawn them into the story. It’s great to see people’s imaginations run away with them. I saw a post where someone made their own Vi Lego figure! The fact that little girls who look like her can see themselves in Vi and be part of that world is amazing.