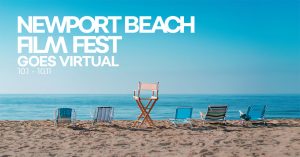 The Newport Beach Film Festival is taking place virtually this year from October 1 to 11. You can stream over 40 feature films, 230 short films, conversations with filmmakers, and more.

Now in its 21st year, the annual festival seeks to introduce independent and international films to Orange County, highlight emerging talent, and bring the local filmmaking community together.

While we can’t gather at the movie theaters to celebrate this year’s roster of films, you can still enjoy 11 days of on-demand entertainment from the comfort of your home while supporting our local arts community.

“Schitt’s Creek” star Eugene Levy, who won an Emmy for his performance this year, received the inaugural Newport Beach Film Festival Lifetime Achievement award in August. Watch the virtual award presentation in the video below.