What is Lightspeed Saber League?

It’s an organization based in Tustin dedicated to creating a lightsaber form of fencing. We respect its cinematic quality, as well as its martial and technical characteristics.

How did it first start?

When “Star Wars: The Force Awakens” premiered in 2015, many lightsaber clubs popped up, and a competitive community quickly developed. The goal was to create an accurate interpretation of lightsaber fighting. We just asked, “If this were a real lightsaber, how would we use it?” We created rules that encourage people to fight like they are in real life-or-death situations. Once our two new East Coast teams are established this year, the league will have three teams there, four here on the West Coast, and one in Texas.

How are the lightsabers made?

They’re made of polycarbonate. The insides have one to three LEDs, and the hilt is aluminum. A lot of manufacturers make them now, so they aren’t hard to find. When you join the league, you’re expected to supply your own equipment; but we’re made up of multiple schools and clubs, and the majority of them will be able to provide you with a starter set of loaner equipment.

I began fencing in college, and I’ve been thinking about lightsaber fighting for more than 10 years. When the technology finally developed, it was an opportunity I couldn’t pass up. That’s why I say that I’m a fan of Star Wars, but I’m an even bigger fan of lightsabers because it represents such a unique take on weapon-based combat.

Try it!
Sign up for a class at lightspeed-saber.com.

O.C. Restaurants and Businesses Giving Back To the Community

In The Garden With A Master Gardener 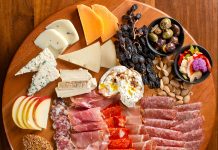