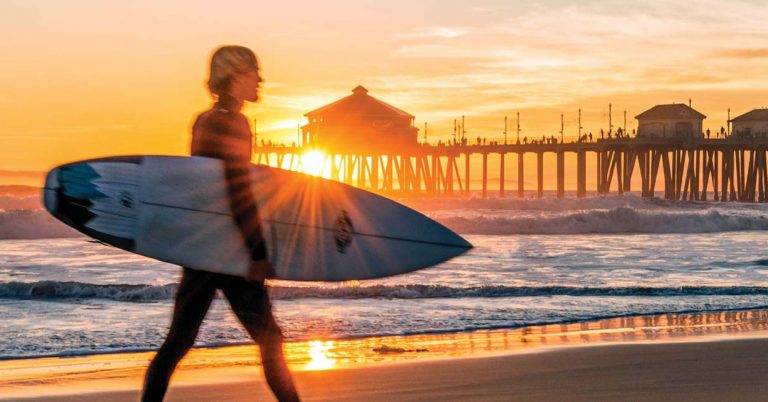 Chance upon a pier and who can resist the quiet pull to stroll to its end? It’s a sojourn that tunes us anew to California’s ultimate siren song, land meeting water. Piers are utilitarian, manmade structures, but walking them, with a wide-open sky and the salty scent of the sea, brings us closer to the ocean—our largest natural resource.

While a walk on a pier is a simple pleasure, it’s not one we should take for granted. Although seemingly built for the ages, they’re deceptively vulnerable: Since 1886, Orange County has had 11 public recreational piers, but only six are left. Water and wind can be abrupt and lethal enemies, with the most violent storms churning currents and whipping up waves that can rip them apart.

Here’s a tour of the piers that remain, plus a few things about them you might not know.

Facts At Main Street and Ocean Avenue; built in 1906 and rebuilt after the 1983 storms ripped out the center portion; 1,780 feet long; walkway material is a hodge-podge sequence of concrete, fitted boards, and rough planking; 10 benches.

Notable view A sharp relief of Santa Catalina Island is visible even on the smoggiest summer day. Look north for a glimpse of the Queen Mary and the dome that used to house the Spruce Goose aircraft.

Desirable acquirable A menacing yet whimsical 7-foot shark-shaped kite ($28) is a popular seller at Up Up and Away Kites, 139½ Main St. Facts At Main Street and Pacific Coast Highway; built in 1904, and rebuilt various times since 1914, most recently in the 1990s; 1,850 feet long; walkway material is concrete; 47 benches.

Notable view Santa Catalina Island is straight ahead, but look inland to see Saddleback, and the San Gabriel Mountains on clear days.

Proximity parking Pay lots on either side of the pier are $1.50 an hour, $15 all day, or more during holiday weekends and special events. Cash or credit card. Scant free street parking is north of the pier on Sixth Street off Pacific Coast Highway in the residential area, four to five blocks from the highway.

Destination dining Sandy’s Beach Grill and Duke’s at the foot of the pier for full meals; Ruby’s Diner at the end, for burgers, shakes, and fries. Notable view Santa Catalina Island and oil derricks are visible to the north; turn south to see the Balboa Pier.

Proximity parking $1.50 an hour in the sizable metered lot at the foot of the pier, 7 a.m. to 6 p.m. (Beware the dozen or so marked spots of 30 minutes maximum.) Metered spots on nearby streets for the same price. Free spaces on residential blocks off 21st and 22nd streets are rarely open.

Destination dining The enclosed, sit-down Newport Pier Grill & Sushi at the end has a full bar and entrées in the $15-to-$40 range. The enclosed snack bar around the back, facing out to sea, offers food and beverages in the $3-to-$10 range.

Desirable acquirable Historical Newport Beach postcards for as little as 35 cents—mail ’em or hang onto ’em as proof you bought something in Newport this cheap! At The Shell Guy of Newport, 104 McFadden Place.

Facts At Palm and Main streets; built in 1906, rebuilt various times, most recently in 1998; 920 feet long; concrete walkway; 28 benches, half of them with backs.

Notable view South-facing beyond the expanse of beach and beachfront homes, it offers a great look at The Wedge bodyboard surfing spot (See Page 79) and the Newport Harbor jetty.

Proximity parking Two street lots adjacent to the north end of the pier, $1.50 an hour, payable to an attendant on leaving the lot. Metered street parking, coins only, also is $1.50 an hour. Free parking is limited to the small residential streets near Palm Street and Balboa Boulevard. Word to the wise: Don’t park in the alleys—you’ll get ticketed.

Destination dining The original Ruby’s opened in December 1982, occupying the historical cupola at the pier’s end.

Facts No formal address—in Dana Point, take Street of the Green Lantern south into the harbor and turn right on Cove Road, which takes you to the north end of the harbor where you’ll see the pier next to the tall ships. The span is 150 feet long; built in 1970-71, and refurbished in 1988; walkway is fir; three benches.

Runt of the litter The only O.C. pier not over the ocean, this tiny spur between Baby Beach and the Ocean Institute complex extends above placid harbor waters. Don’t be put off—there is a pleasant, noncommercial vibe here, especially on weekdays when few are about; its quiet charm beckons.

Notable view A unique 360-degree panorama reveals a kaleidoscopic topography. Dana Point’s signature bluffs loom over the harbor’s north and west sides, while the view to the south has the pleasant harbor, and boats in two marinas. To the southeast: a view of the jetty and the sparkling ocean beyond.

Proximity parking The 120 or so spaces in a lot at the foot of the pier are free.

Stroll-friendly bite The Sea-Life candy pop ($5.95), available at the Ocean Institute gift shop, is designed for kids: a rainbow sucker wrapped around a 6-inch stick, crowned by a stuffed animal toy—whale, dolphin, or toucan.

Desirable acquirable Also at the gift shop, Ocean Minded flip-flops are fancifully designed, multihued, and made from recycled and sustainable materials. Prices range from $25 to $36 a pair, in men’s and women’s sizes. Proceeds benefit the nonprofit Ocean Institute.

Notable view Best inland gaze from an O.C. ocean pier—picturesque cliffs are dotted with buildings in a mélange of architectural styles, while Amtrak and Metrolink trains pause and go at the foot of the pier.

Proximity parking $1.50 an hour from 10 a.m. to 5 p.m. at the two pay lots on Avenida Del Mar, as the street winds down to shoreline and adjacent metered street spots. A few street spaces on Coronado and Alameda lanes, Avenida Monterey, and other nearby residential lanes are free, but good luck finding one empty.

Stroll-friendly bite At the Pier Shack & Grill at the end of the pier, a Spam Musubi ($1.50) gets you a grilled slab of spam on a block of rice wrapped in nori seaweed.

Junk-food fix The Pier Shack and Grill breaks up the standard fare with Hawaiian surf grub such as Loco Moco ($6.95), the “kitchen sink” plate of hamburger patty, rice, gravy, and fried egg; and the equally-messy Pepper Belly (corn chips, chili, and cheese, $6). Picnic benches and much-needed
napkins adjacent to the stand.

Desirable acquirable Ocean Gifts at 612 Avenida Victoria across from the pier tempts with fanciful, oversized beach bags from artist Paul Brent ($30 to $40).

This article originally appeared in the May 2012 issue of Orange Coast magazine.