05 THEATER
The daughter of an architect, playwright Amy Freed satirizes that industry in her 2014 play “The Monster Builder.” This comedy dwells on two not-so-prestigious protagonists who get to meet their hero—with unexpected results. May 5 through June 4 at South Coast Repertory, 655 Town Center Drive, Costa Mesa, 714-708-5555, scr.org

06 ART
The temporal nature of architecture will be one theme of the 2017 California-Pacific Triennial. Selected artists from nearly a dozen Pacific Rim countries are featured in this survey. May 6 through Sept. 3 at Orange County Museum of Art, 850 San Clemente Drive, Newport Beach, 949-759-1122, ocma.net

10 MUSIC
“Sincerely, Future Pollution” is the ominous title of Timber Timbre’s new album. The Polaris Prize-nominated indie quartet from Canada will sing from its forecasts and regrets, as well as tunes from past collections. May 10 at The Observatory, 3503 S. Harbor Blvd., Santa Ana, 714-957-0600, observatoryoc.com 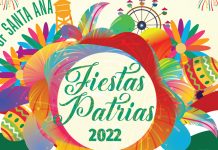