In her nonfiction debut, Kim Hooper shares her experiences with two ectopic pregnancies and two other pregnancy losses before giving birth to her daughter in 2017. Written in a lively, conversational style, the book contains a detailed table of contents so readers can flip to whatever subjects are on their minds, from “Grieving in a society that sucks at grief” to “Dealing with other people having babies.”

What books did you read as you went through your journey?
I think what helped me most were memoirs of people who had been through this, because I could relate to the different emotions: the anger, the sadness, the frustration. I felt, “Oh, these people get it.” But what I was missing was, “What do I do with these feelings?” I called on my friends—Meredith Resnick, who is a licensed clinical social worker, and Huong Diep, who is a board-certified psychologist—to help round out the book, making it not just a memoir but more of a companion to give people insights to explain the personal experiences I was going through.

What are your thoughts on Meghan Markle and Chrissy Teigen’s recent public statements about their miscarriages?
The fact that higher-profile women are coming out and sharing their stories is going to help the whole community be more open. Hopefully, that’s encouraging other people—even if they don’t want to share their own personal stories, because obviously it’s not for everyone, but they can at least feel there’s no shame in their story; others have been through something similar. 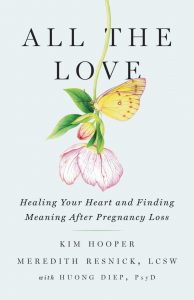 You wrote about unhelpful things people say such as “Everything happens for a reason” and “At least it happened early.” Can you talk about that?
I kept a list in my phone of things that people had said that in the moment I couldn’t figure out why it was so irritating to me, but I knew I felt angry. I felt like, I can’t be the only person who’s irritated with these things like, “Just try again, one of them will stick.” I’ve realized since (that) it’s good to have compassion because people cannot tolerate pain and grief. They want to come up with a solution and rush past it. That’s one thing I’m grateful for with my experiences. I’ve learned to be there and be present with people more than I was before.

After four pregnancy losses, what kept you from giving up?
I don’t know why we tried a fifth time; I just felt that there has to be some kind of happy conclusion. I tell people that science doesn’t always know everything, and sometimes you have to trust your body and your gut and know what you can endure. It’s a funny thing. I think every baby now is a miracle because the steps that have to be accomplished for a baby to be born are just crazy. It has completely changed my perspective and made me more grateful now that I see how fragile life is.