Ranger and I were passing through Tucson that afternoon during monsoon season. Sheets of rain. Pounding thunder. The frightened beagle-husky-Chihuahua crawled into my lap. I was afraid, too, because I’d quit my job, packed my car, and left Orange County.

It’s been three years since that drive to our new home in Roswell, N.M., and there’s been plenty of adjustment. I traded an administrative job at UC Irvine to become a full-time yoga teacher. I fell in love and got married. I no longer have year-round weather that seemed to range between 65 and 75 degrees. And there are fewer places to walk.

I recently drove Ranger to the usual spot for our daily outing. But my dog didn’t jump out; he froze and looked west. He wouldn’t budge forward. He would only back up and rush to the car. It wasn’t thunder, which Ranger hates, but I wondered if maybe a storm was coming. If I’d conveyed in my voice that he must walk, then he might have followed. But I didn’t. Instead I thought: I don’t blame you. Exact same walk. I’m tired of it, too. And not a bird in the sky.

One of the things I miss most about Orange County is its birds. My walks with Ranger always were about exercising him, but they also gave me a chance to photograph birds. When I picked up my camera, Ranger knew we were going walking. Together we watched the teeming migratory and resident birds of Irvine, Newport Beach, and Laguna Beach—beautiful, crowded cities nonetheless swarming with birds.

One of my favorite places to shoot was Upper Newport Bay. On the trail, I’d make Ranger sit, ask him to be quiet. And then we’d wait. Great blue herons. Black-necked stilts. Closer to us, an Anna’s hummingbird clinging to a reed.
Sometimes we’d go to the little cove in Corona del Mar where I’d take pictures of pelicans in flight, their wide eyes tracking me, too. Or we’d climb to the Top of the World in Laguna Beach and be still enough to see a covey of quail dart from one bush to the next. At Crystal Cove State Park, we’d spot a roadrunner, glorious with its tiny blue spot at the eye, bright as the ocean in the distance.

Roswell isn’t like that. The rare Peregrine, sure. Some ducks in February. A fat robin. Mississippi kites in late summer. In winter, I wait for sandhill cranes, but sometimes they’re so high it’s hard see them. I’ve talked to bird lovers here who tell me there are birds nearby. One bragged about how many species come through Roswell, many heading for the Bitter Lake National Wildlife Refuge about a half-hour drive away. But there, if I want a closer view, I have to watch from a lookout point or, in winter, take the slow, scenic drive. It’s not like it was when Ranger and I could walk outside and find a crowded sky.

The day Ranger stopped walking in Roswell, I decided to go alone. That’s when I heard it: shotguns. The hunters were far away, but audible. It wasn’t one blast. It was a series of dull and low cracks. Ranger had heard them first. Someone told me later that it was dove season. The bird lover in me hated to hear that. I know people hunt; I understand about sport and managing populations and eating what is hunted. Please eat the doves you shoot, I thought.
Ranger has always been perceptive. Maybe he senses that I’m not always thrilled about this place. In Orange County, the landscape was my guide. Ocean. The shrinking streets on the way to Balboa. The palm trees along MacArthur Boulevard.

Of course, the dog doesn’t sense these particulars. His life here is just dusty and rough. He gets stickers in his paws, and has to deal with everyday thunder, firecrackers in July, and shotgun echoes in autumn. As good as it has been to us, Roswell isn’t the beautiful world where Ranger and I navigated through pockets of wildlife. In Irvine, we walked on perfect sidewalks past manicured lawns with turkey vultures above and red-tailed hawks on light posts. We’d climb into the car and head down University Drive, mud swallows swirling in our wake.

But don’t confuse my sensitivity to change with homesickness or sadness. It’s simply a way of understanding the forces that shaped me. Who would I be if I stopped looking for birds and started hunting them? Who would Ranger and I be if we had not grown together in our suburban aviary along the shore, watching the beautiful flight of delicate lives? Me standing still. Ranger sitting still, too.

Get Out There!
Participate in the National Audubon Society’s Great Backyard Bird Count from Feb. 13 through 16. gbbc.birdcount.org 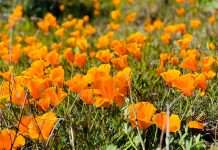