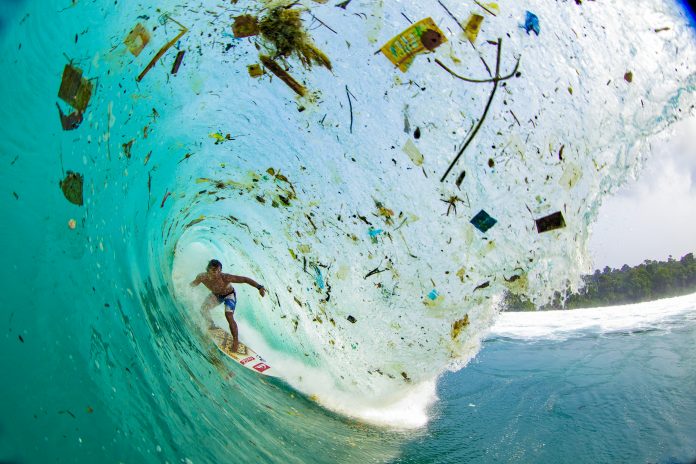 A New Earth Project is a collaboration between outdoor brands, brand ambassadors, and a packaging company that all share one goal—to rid the Earth’s waterways of plastic pollution. Now with a showroom in Laguna Beach, the project is spearheaded by Wes Carter, the third-generational owner of Atlantic Packaging, the largest privately owned packaging company in North America.

“The surfing industry was born in Southern California, so many of the brands and brand ambassadors are here,” Carter says. “Our company is based in the Southeast, and in order to engage the surfing industry we felt like we needed to plant a flag here in Laguna Beach.”

The showroom features the company’s line of “New Earth Approved” products, which are made from renewable resources such as wood fiber, hemp, and mycelium, which are all curbside recyclable or compostable.

“Creating closed-loop systems for plastic at the consumer level is very, very difficult,” Carter says. “But, if we can transition from single-use plastic packaging to fiber-based packaging, then not only is it curbside recyclable, it also breaks down in a short amount of time if it does leak into the environment.”

As an avid outdoorsman, Carter witnessed the detrimental impact of plastic pollution on the environment firsthand. In addition to implementing sustainable packaging within his own company, his strategic collaboration between the surfing and outdoor enthusiast communities aims to facilitate the transition to sustainable packaging for the entire supply chain.

“A New Earth Project is meant to be a movement,” he says.

The organization is teaming up with documentarian Peter King to release an eight-part series about A New Earth Project’s mission, featuring stories from some of the world’s most recognizable surfers.

“We can tell their stories with the background being Pipeline, or Yosemite, or fly fishing in Alaska,” Carter says. “We have these beautiful canvases of these wonderful places.”

Atlantic Packaging has a long history of compassionate endeavors. The company was founded 75 years ago by Carter’s grandfather. It got its start as a small-town weekly newspaper, but its impact was far reaching.

“My grandfather won a Pulitzer prize with that newspaper for his efforts in fighting the Ku Klux Klan, which resulted in over 300 Klansmen being imprisoned,” he says. “The values and the ethics that drive the organization have come from that foundation.

On Earth Day, April 22nd, the first episode of the documentary series “Journey to a New Earth” will premiere on Outside TV and FUEL TV. On this day, A New Earth Project will also be launching their website which has information about the work they’re doing, as well as a catalog of “New Earth Approved products that are available for purchase.

“Making a change requires all of us to collectively decide that we’re gonna do this for ourselves, our children, and future generations,” he says. “I really believe that this initiative around sustainability and cleaning up the planet can be our generation’s moon landing.”