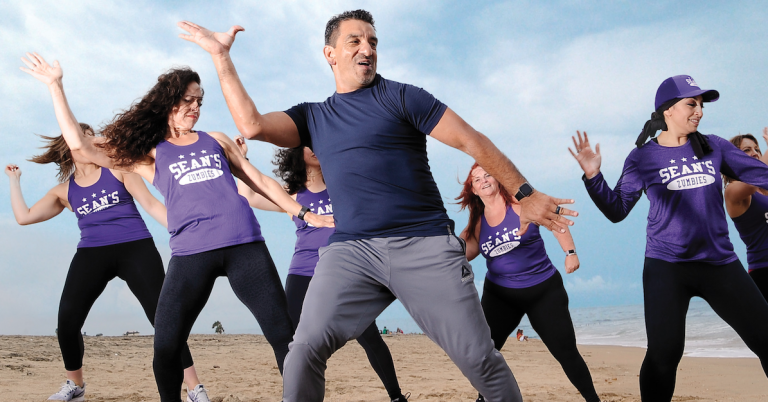 At 42, Sean Soto weighed 270 pounds, lost his breath tying his shoes, and learned he was about to be a father for the fourth time. He wanted to run with his son when the boy was 10, so he stopped eating late, started exercising, and lost 45 pounds in six months. Eleven years later, Soto is more than 100 pounds lighter, and his Zumba students are following his lead—three longtime devotees lost a combined 300 pounds.

I was boxing at the gym when I heard the music and saw 50 women dancing in a class. I like to dance. I thought, “I’ll try this!” I’d never even heard of Zumba.

When did you start teaching?

In 2014, at a Santa Ana church. That’s when I saw how important it was to have energy and say thank you for coming. I’m not a trained dancer. But it’s about connecting. Within two weeks, the class quadrupled.

What draws people to your classes?

Anyone around me can tell I’m truly interested in their health. Because of my weight loss, I get the struggle. Also, I don’t look like I just walked out of a bodybuilding magazine.

You do classes on the beach?

The gym was closed on Christmas 2015, a day I normally taught. I said, “Why don’t we do Zumba at Corona del Mar early?” We had 17 people show up. Then we did it on other holidays. And it just kept growing. In 2017 on the Fourth of July, we had 94 people there dancing on the beach. It was an absolute career highlight!

What are you most proud of?

Individual journeys. My first client dropped her body fat 30 percent, and she’s now an instructor. Someone else needed an escape. She said, “I was going through a
bad experience. Your classes got me through that tough time.” That’s what the right environment can do.

Find a schedule of Soto’s classes at facebook.com/sean.soto.357