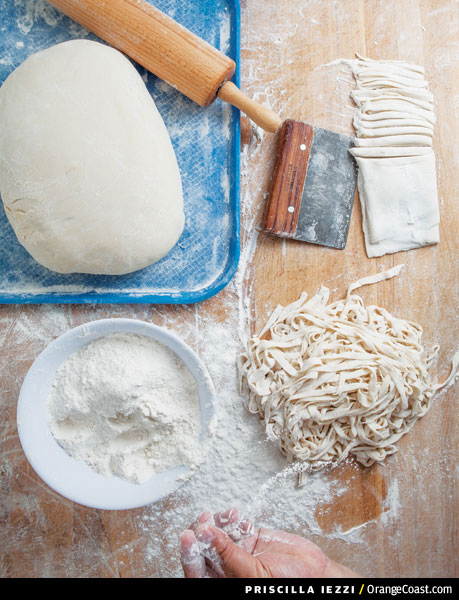 There’s nothing like a bowl of noodles for the ultimate in Asian comfort food—but it’s even more special when they’re made in-house. It’s admirable that a small-but-dedicated cadre of O.C. restaurants continues to practice this vanishing art at a time when factories can churn them out much more economically. Whether the noodles are knife-cut, hand-torn, or hand-kneaded, they’re all worth slurping.

1. Peking Restaurant
This old-school Mandarin eatery has called Little Saigon home for 30 years and offers one of the homiest renditions of beef noodle soup. The broth is a deep, earthy brown, with hunks of beef and bright green bok choy atop scraggly ribbons of made-to-order noodles, left, that are soft but still possess a pleasing bite. Not in the mood for soup? Try them stir-fried with shrimp, chicken, beef, or pork. Vegetarian options, too. 8566 Westminster Blvd., Westminster, 714-893-3020

2. Mom’s Hand Made Noodles
It doesn’t get more obvious, or winsome, than the name of this restaurant, which offers a traditional Korean soup called kalguksu, meaning “knife-cut” noodles. Made daily, the speckled wheat noodles look heavy but are magically springy and light. The nonseafood version comes garnished with julienned zucchini, carrot, and kelp, as well as with bits of savory beef and fresh pork dumplings. The umma-son kalguksu broth is light, so you can devour the entire bowl. 4498 Lincoln Ave., Cypress, 714-828-5959

3. Mas’ Islamic
A diverse mix of diners flocks to this Halal establishment, known for its Chinese-Islamic fare. Anything with lamb reigns, but the real must-order is the dough-sliced chow mein, aptly named since the noodles are knife-carved from a block of dough. Generous portions of thick, tangled, and wondrously elastic noodles arrive on large platters and can be stir-fried with lamb, beef, chicken, shrimp, or vegetables. Come with an empty stomach or several companions—you’ll need help to tackle this tasty mountain of carbs. 601 E. Orangethorpe Ave., Anaheim, 714-446-9553

4. Gomen
This oft-packed cult-favorite ramen-ya is perhaps the only Japanese ramen shop in Orange County, if not all of Southern California, that makes its own ramen noodles. The catch? Of the noodles offered, only the thin, straight variety is made in-house, and only on certain days. So call ahead, especially since hours vary; lunch is served Monday through Saturday, dinner on Friday and Saturday. Once you’ve scored, you’ll find total ramen bliss via supple, golden noodles swimming in a rich and milky tonkotsu pork broth. 7147 Katella Ave., Stanton, 714-761-8007

5. Oki Doki
The Tustin outpost of this small Japanese chain is the only one to feature authentic, handmade udon and soba. Both are served with a simple dashi, or fish-stock based broth, and toppings such as fish cake or tempura. If you prefer a linguinilike noodle, there’s udon, made with rice flour. Soba is a spaghettilike strand made of buckwheat flour. In warmer weather, opt for the zaru soba, a bed of cold soba noodles to plunge into tsuyu, a dipping sauce with scallions and horseradish, for a refreshing, light meal. 13681 Newport Ave., Tustin, 714-730-7051, 345okidoki.com

7. Liang’s Kitchen
Liang’s Kitchen gets the nod for its fat, ruffled curls of noodles with just the right heft. Go for the thick noodles, then decide whether you want them dry (sans broth) and topped with black bean or beef tendon, or with broth, from the standard beef to spicy pickled cabbage and pork. The broth doesn’t pack a major flavor punch, allowing the noodles to claim all the glory.  5408 Walnut Ave, Irvine, 949-262-1404, liangskitchen.com