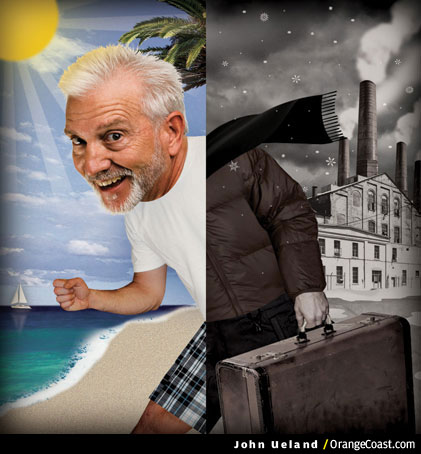 You seem like reasonable, self-aware people who aren’t afraid to confront hard truths, and who no doubt have, from time to time, asked the very same question we pose on this month’s cover: Is Orange County worth it? Guessing here, but you probably asked it the last time you felt your soul die a little on the 405, or while gagging at a real estate ad for a million-dollar hovel miles from the beach. It’s OK. We’ve all been there.

So we tried hard in this month’s cover feature to help clarify your thinking. Ultimately, if you’re reading this, it probably means you’re here for the duration, even if not entirely convinced.

But let me tell you why I think it’s worth it.

I moved here from Pittsburgh, where the steel industry had melted down and unemployment in the mill towns was hitting 25 percent. I left in late fall, about the time the skies there turn gun-metal gray and the streets come alive with the clickety-buzz of studded snow tires. Winters last a hundred years.

In Orange County, I found an ocean, and it has whales in it. I can go watch them if I want. I also found a taco stand run by a Vietnamese family, and they taught me about cilantro. I discovered Meyer lemons and pho, board shorts and Rainbow sandals, coastal sage and bougainvillea. I watched our 60-pound dog bloat to 80 pounds by gorging on avocados that dropped from a backyard tree. I learned that not all local economies are rooted in a single, vulnerable industry; some thrive because they’re nourished by everything from tourism to tech.

True, we paid twice as much for half the house, and the coarse beach sand here is nothing like the talcum-soft drifts that rim the Gulf of Mexico, where my family has a home. The word “melanoma” comes up a lot, and the mechanized roar of the freeways is what I imagine will be the soundtrack in hell. Three decades later, I’m still not used to driving 40 miles to dinner.

But I’m not leaving. We live in a dynamic, vital, endlessly fascinating place where anything seems possible. And that’s not something statistics will ever tell you.